The Komondor, also known as the Hungarian sheepdog, is a large, white-coloured Hungarian breed of livestock guardian dog with a long, corded coat.

Sometimes referred to as 'mop dogs', the Komondor is a long-established powerful dog breed that has a natural guardian instinct to guard livestock and other property. The Komondor was brought to Europe by the Cumans. The Komondor breed has been declared one of Hungary’s national treasures, to be preserved and protected from modification. 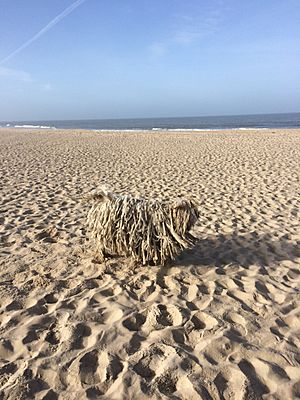 Komondor at the beach

The Komondor's coat is long, thick, and strikingly corded white coat, about 20 – 27 cm long (the heaviest amount of fur in the canine world), which resembles dreadlocks or a mop. The puppy coat is soft and fluffy. However, the coat is wavy and tends to curl as the puppy matures.

A fully mature coat is formed naturally from the soft undercoat and the coarser outer coat combining to form tassels or cords and will take about two years to form. Some help is needed in separating the cords so the dog does not turn into one large matted mess.

The length of the cords increases with time as the coat grows. Moulting is minimal with this breed, contrary to what one might think (once cords are fully formed). The only substantial shedding occurs as a puppy before the dreadlocks fully form.

The Komondor is born with only a white coat. However, a working Komondor's coat may be discolored by the elements and may appear off-white if not washed regularly. Traditionally, the coat protects the Komondor from possible wolves' bites as the bites would not penetrate the thick coat. The coat of the Komondor takes about two and a half days to dry after a bath. 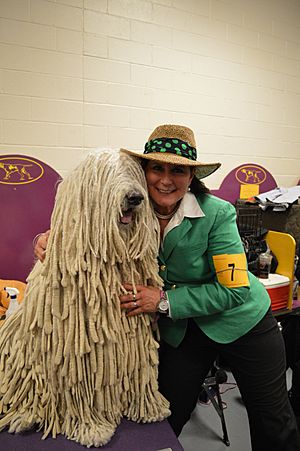 The Komondor is built for livestock guarding. Its temperament is like that of most livestock guarding dogs; it is calm and steady when things are normal, but, in case of trouble, the dog will fearlessly defend its charges. It was bred to think and act independently and make decisions on its own.

The Komondor is affectionate with its family, and gentle with the children and friends of the family. Although wary of strangers, they can accept them when it is clear that no harm is imminent, being instinctively very protective of its family, home, and possessions. The Komondor is very good with other family pets, often very protective over them, but is intolerant to trespassing animals and is not a good dog for an apartment.

The dog is vigilant and will rest in the daytime, keeping an eye on its surroundings, but at night is constantly moving, patrolling the place, moving up and down around its whole territory. The dogs will usually knock down intruders and keep them down until its owner arrives. Hungarian Komondor breeders used to say that an intruder may be allowed to enter the property guarded by a Komondor, but he will not be allowed to leave or escape. 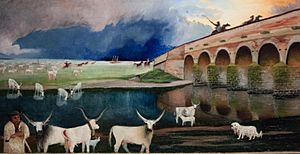 Painting of a herd and a Komondor guarding it 1903

The breed has a natural guardian instinct and an inherent ability to guard livestock. An athletic dog, the Komondor is fast and powerful and will leap at a predator to drive it off or knock it down. It can be used successfully to guard sheep against wolves or bears. It is a big, strong dog breed, armored with a thick coat. The coat provides protection against wild animals, weather and vegetation.

The coat looks similar to that of a sheep so it can easily blend into a flock and camouflage itself giving it an advantage when predators such as wolves attack. The Komondor is one breed of livestock guardian dog which has seen a vast increase in use as a guardian of sheep and goats in the United States to protect against predators such as coyotes, cougars, bears, and other predators. 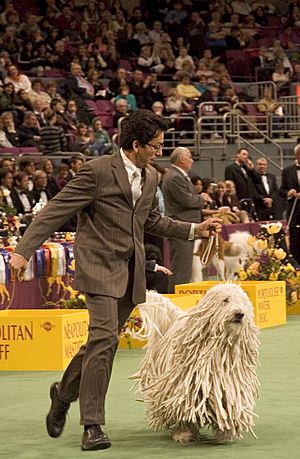 Due to the Komondor's size, power, speed and temperament, a lack of obedience training can result in danger to others. Komondors generally take well to training if started early (ideally between 4–8 months). A Komondor can become stubborn when bored, so it is imperative that training sessions be upbeat and happy. Praise is a must, as are consistent and humane corrections. Once a Komondor gets away with unfriendly or hostile behavior, it will always think such behavior is appropriate. Therefore, consistent corrections even with a young puppy are necessary to ensure a well-adjusted adult.

Socialization is also extremely important. The Komondor should be exposed to new situations, people and other dogs while still a puppy. Because it is a natural guard dog, a Komondor that is not properly socialized may react in an excessively aggressive manner when confronted with a new situation or person.

Given the proper environment and care, a Komondor is a responsible, loving dog. It is devoted and calm without being sluggish. As in any breed, there is quite a range of personalities, so your needs should be outlined clearly to your breeder. An experienced breeder can try to identify that personality which would be happiest as an independent livestock dog, or that which wants more to please and would make a good obedience dog or family pet.

Adolescence can be marked by changes in a Komondor's temperament, eating habits, train-ability, and general attitude. Breed-specific legislation requires some breeds to be muzzled in public places. Romania is the only country that requires Komondors to be muzzled.

All content from Kiddle encyclopedia articles (including the article images and facts) can be freely used under Attribution-ShareAlike license, unless stated otherwise. Cite this article:
Komondor Facts for Kids. Kiddle Encyclopedia.