Kona coffee is the market name for coffee (Coffea arabica) cultivated on the slopes of Hualalai and Mauna Loa in the North and South Kona Districts of the Big Island of Hawaii. It is one of the most expensive coffees in the world. Only coffee from the Kona Districts can be described as "Kona". The weather of sunny mornings, cloud or rain in the afternoon, little wind, and mild nights combined with porous, mineral-rich volcanic soil create favorable coffee growing conditions. The loanword for coffee in the Hawaiian language is kope, pronounced. 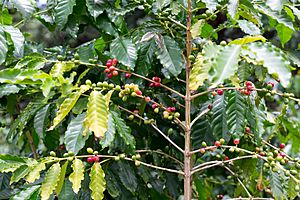 Samuel Ruggles brought coffee to the Kona District in 1828

The coffee plant was brought to the Kona district in 1828 by Samuel Reverend Ruggles from Brazilian cuttings. English merchant Henry Nicholas Greenwell moved to the area and established Kona coffee as a recognized brand later in the 19th century. The former Greenwell Store and Kona Coffee Living History Farm have since become museums.

In other parts of the Hawaiian islands, it was grown on large plantations, but the 1899 world coffee market crash caused plantation owners to lease land to their workers. Most were from Japan, brought to work on sugarcane plantations. They worked their leased parcels of between 5 and 12 acres (49,000 m2) as family concerns, producing large, quality crops.

The tradition of family farms continued throughout Kona. The Japanese-origin families have been joined by Filipinos, mainland Americans, and Europeans. There are approximately 800 Kona coffee farms, with an average size of less than 5 acres (20,000 m2). In 1997 the total Kona coffee area was 2,290 acres (9 km2) and green coffee production just over two million pounds.

All content from Kiddle encyclopedia articles (including the article images and facts) can be freely used under Attribution-ShareAlike license, unless stated otherwise. Cite this article:
Kona coffee Facts for Kids. Kiddle Encyclopedia.