The Kortright Centre for Conservation is a suburban conservation area and educational facility in Vaughan, Ontario, Canada in the northern part of the Greater Toronto Area. It is operated by the Toronto and Region Conservation Authority. The area in which it is located is predominantly forested in its western and northern extent. The Humber River is situated in the west and the Cold Creek and Harris Creek are to the north.

The facility was used as the location of the Somafree Institute in David Cronenberg's film The Brood (1979).

The facility is named after Dr. Francis Kortright (1887–1972), an engineer, businessman, author and dedicated conservationist. 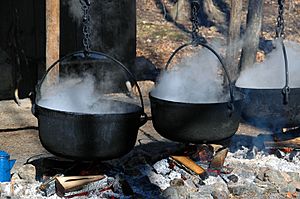 Maple syrup being prepared at the Kortright Centre.

Between March and mid-April, the Kortright Centre for Conservation hosts its annual Maple Syrup Festival. The focus of the Maple Syrup Festival is to educate the public on how Maple Syrup production has changed over time. Demonstrations are given on how to properly identify a maple tree, how First Nations people cooked sweet water, how European settlers brought over kettles for cooking, and how maple syrup is made today in a modern Sugar shack.

All content from Kiddle encyclopedia articles (including the article images and facts) can be freely used under Attribution-ShareAlike license, unless stated otherwise. Cite this article:
Kortright Centre for Conservation Facts for Kids. Kiddle Encyclopedia.