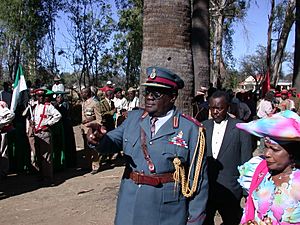 Kuaima Isaac Riruako (born Issaskar Kakuremdiro; 24 April 1935 – 2 June 2014) was a Namibian politician. He served as a National Unity Democratic Organisation (NUDO) representative in Parliament, and he was the President of NUDO and its presidential candidate in the 2004 presidential election. He placed fourth with 4.23% of the national vote.

He was also the paramount chief of the Herero people from 1978.

Riruako died from hypertension on 2 June 2014 in Windhoek, aged 79. He had been in intensive care for a month before his death.

All content from Kiddle encyclopedia articles (including the article images and facts) can be freely used under Attribution-ShareAlike license, unless stated otherwise. Cite this article:
Kuaima Riruako Facts for Kids. Kiddle Encyclopedia.