Kumarpal Balabhai Desai is an author, critic, editor, journalist, columnist and translator from Gujarat, India. He studied and later taught at the Gujarat University. He is associated with several social and Gujarati literary organisations such as Gujarati Sahitya Parishad. He has written and edited more than hundred books including biographies and several works on Jainism. He is awarded the Padma Shri in 2004. 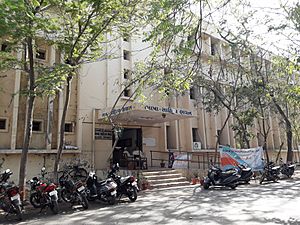 School of Languages where Desai served as director and professor

Kumarpal Desai was born on 30 August 1942 at Ranpur to Balabhai Desai whose nom-de-plume was Jaybhikhkhu, a prolific Gujarati writer; and Jayabahen. His family is native of Sayla. He joined H. K. Arts College. He completed BA and MA in 1963 and 1965 respectively from Gujarat University with Gujarati as a major subject.

Desai joined Navgujarat College in Ahmedabad as a professor in 1965. He was awarded PhD in 1980 for his thesis on Anandghan completed under guidance of Dhirubhai Thaker. In 1983, he joined the Department of Gujarati Literature, School of Languages, Gujarat University. He became the Reader in 1988 and the Professor in 2000. He became the Head of Department in November 2001 and the Director, School of languages in 2003 and served till 2004. He was elected the Dean, Faculty of Arts and served for two years. Twenty students received PhD under his guidance by researching subjects like Jain philosophy, Gujarati journalism and peace. He had worked as a sports commentator also. He serves as the Professor Emeritus at Vishwabharati Institute, Ladnu.

He started writing at the age of eleven. His first short story was published in children's weekly Zagmag. He was influenced by his father Jaybhikhukhu and several other writers like Jhaverchand Meghani, Gunvantrai Acharya, Dhumketu and Dula Bhaya Kag. His first book Vatan, Tara Ratan when he was in college. In 1962, he started writing a column in Gujarat Samachar and his first book, a children's biography, Lal Gulab on Lal Bahadur Shastri was published in 1965. The book was successful and he wrote full biography Mahamanav Shastri on him in 1966. Subsequently, he wrote several biographies. He also created as a wit and humour character Damodar Mehta for children's books.

He has translated Austin Bukenya's play, The Bride as Navavadhu (2000) in Gujarati. He has written two books on journalism, Akhabari Lekhan (1979), Sahitya ane Patrakaratva (1999). He has also published some books in English and contributed in field of sports also.

Desai is an expert of Indian culture, Jainism and Jain literature. He regularly delivers lectures on Jain philosophy and Indian culture in India and abroad.

He was awarded the Padma Shri, the fourth highest civilian award of India, in 2004. He has also been conferred many other awards including the Jain Ratna Award (2001), Gujarat Ratna award, Dhanji Kanji Gandhi Suvarna Chandrak (2001), Hemchandracharya Award (2002), Sahitya Gaurav Puraskar (2009) and Ranjitram Suvarna Chandrak (2015). In 2019, he received the Bal Sahitya Puraskar from Sahitya Akademi for his contribution in Gujarati children's literature.

Desai married Pratima and has two sons, Kaushal and Nirav.

All content from Kiddle encyclopedia articles (including the article images and facts) can be freely used under Attribution-ShareAlike license, unless stated otherwise. Cite this article:
Kumarpal Desai Facts for Kids. Kiddle Encyclopedia.