Kunduz or Qunduz is one of the 34 provinces of Afghanistan, located in the northern part of the country next to Tajikistan. The population of the province is around 953,800, which is multi-ethnic and mostly a tribal society.

The city of Kunduz serves as the capital of the province. The Kunduz Airport is located next to the provincial capital.

The Kunduz River valley dominates the Kunduz Province. The river flows from south to north into the Amu Darya river which forms the border between Afghanistan and Tajikistan.

The river, its tributaries and canals provide irrigation to the irrigated fields that dominate land usage in the agricultural province. There are also rain-fed fields and open range land that span several miles. 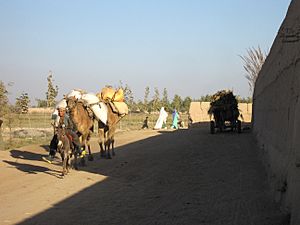 A road in the Kunduz Province

Agriculture and livestock husbandry are the primary occupations of the provinces residents. Fruit and vegetables are the most commonly farmed items but there is also some cotton and sesame production. Farmers face water shortages.

Men and women in Kunduz are employed in clothing production, metal working, carpentry and the animal hide business.

The port of Sherkhan Bandar provides an international outlet for Kunduz's goods and has allowed for the importing commercial goods from Asia, Middle East, and the Persian Gulf.

All content from Kiddle encyclopedia articles (including the article images and facts) can be freely used under Attribution-ShareAlike license, unless stated otherwise. Cite this article:
Kunduz Province Facts for Kids. Kiddle Encyclopedia.