Kunzea 'Badja Carpet' is a cultivar of Kunzea badjaensis. It is a low-growing shrub of the family Myrtaceae found in the southeastern tablelands of New South Wales, Australia. It is similar to Kunzea capitata, but it has a lower growth form and white rather than pink flowers. Because of these differences it has been described as a distinct species. The species had previously been known as Kunzea sp. 'Wadbilliga'. 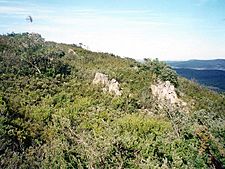 Kunzea sp. "Wadbilliga" at the summit of Big Badja Hill

The habitat of the species is over 1000 metres (3500 ft) above sea level, usually in heathland. It occurs at Big Badja Hill and similar sites in Deua National Park and Wadbilliga National Park, such as Mount Throsby.

This cultivar is commercially available, having been registered with the Australian Cultivar Registration Authority (ACRA) in 1979 after successful propagation at the Australian National Botanic Gardens in Canberra in 1974. This plant is suitable as a frost-resistant groundcover in sunny situations. The fluffy white flowers and red stems of new growth are appealing features. It regenerates well from cuttings.

All content from Kiddle encyclopedia articles (including the article images and facts) can be freely used under Attribution-ShareAlike license, unless stated otherwise. Cite this article:
Kunzea 'Badja Carpet' Facts for Kids. Kiddle Encyclopedia.