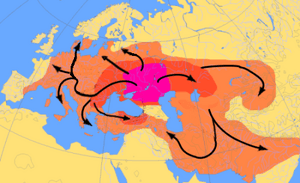 Map of Indo-European migrations from ca. 4000 to 1000 BC based on Kurgan model. The red area corresponds to the area that may have been settled by Indo-European-speaking peoples up to ca. 2500 BC, and the orange area by 1000 BC.

It uses both archaeology and linguistics to show the history of their culture at different stages of the Indo-European expansion.

When it was first suggested in 1956, Marija Gimbutas's answer to the question of Indo-European origins was a pioneering interdisciplinary synthesis of archaeology and linguistics. From the nineties on, new archaeological evidence from Northern European prehistoric cultures was put forward on the influence and expansion of Kurgan cultures.

All content from Kiddle encyclopedia articles (including the article images and facts) can be freely used under Attribution-ShareAlike license, unless stated otherwise. Cite this article:
Kurgan hypothesis Facts for Kids. Kiddle Encyclopedia.