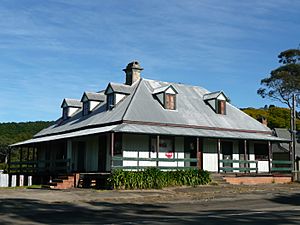 First discovered in 1795 by explorer Matthew James Everingham. Although credit is usually attributed to Archibald Bell, Jr. as he was the first European to cross the mountains via this route; now known as Bells Line of Road. Kurrajong Heights was previously known as Northfield. Lochiel House, built in 1825 by former convict Joseph Douglass from Dumfries, Scotland. The old post office was opened in the 1860s. St David's Church was built in 1867. These significant buildings can still be seen on Bells Line of Road. In 1926, the railway line was extended from Richmond to Kurrajong after years of petitioning from the local orchadists. The railway line was closed in 1952.

The area is well known for its craft stores, B&B style accommodation and quality restaurants. There are "pick your own fruit" orchards, offering stone fruit, apples, and nuts.

In early June, teams compete in the annual Back to Back (shearing a sheep and knitting a jumper in one day) at Turpentine Tree.

In early October, Madison's Mountain Retreat (a local farmstay) has its alpaca shearing day which everyone is welcome to watch.

At the end of December, there is the open day at the Tutti Fruitti Rose Farm.

All content from Kiddle encyclopedia articles (including the article images and facts) can be freely used under Attribution-ShareAlike license, unless stated otherwise. Cite this article:
Kurrajong Heights, New South Wales Facts for Kids. Kiddle Encyclopedia.