Kyle Bay is a suburb in southern Sydney, in the state of New South Wales, Australia. Kyle Bay is 19 kilometres south of the Sydney central business district, in the local government area of the Municipality of Kogarah and is part of the St George area.

Kyle Bay takes its name from the bay that sits on the northern shore of the Georges River. It is a tiny, affluent, picturesque suburb around this bay and Harness Cask Point. Kyle Bay is surrounded by the suburbs of Blakehurst, South Hurstville and Connells Point. Kangaroo Point sits on the opposite bank of the Georges River. It is 7 km west of Botany Bay and 12 km north-west of the Cronulla surfing beaches. This leafy suburb is graced with scenic riverside parks and reserves including Merriman Reserve and Donnelly Reserve. Kyle Bay and Harness Cask Point are natural formations.

Kyle Bay was named after local shipbuilder Robert Kyle (or Coile). The land around Kyle Bay was originally granted by the Crown to Robert Kyle and James Merriman on 9 November 1853. Kyle Parade and Merriman Street are named in their honour. Legacy House is a historic estate on the eastern shore of Kyle Bay. It was bequest to children and first operated from 1948 to 1983 as a convalescent home for children. It was then taken over by Legacy as a home for the children of servicemen/women who have either lost their parents or whose parents were unable to care for them. 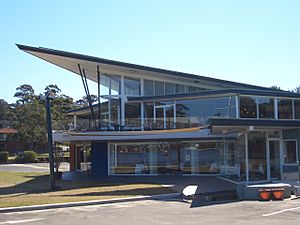 According to the 2011 census, there were 837 people usually resident in Kyle Bay. 29.4% stated they were born overseas with the top countries of birth being China 7.6%, Greece 2.4% and England 1.7%. English was stated as the only language spoken at home by 60.7% of residents and the most common other languages spoken were Greek 10.0%, Cantonese 7.3% and Mandarin 3.5%. The most common responses for religious affiliation were Catholic 24.5%, Orthodox 22.6% and Anglican 16.9%, No Religion 14.0% and Buddhism 3.1%. The current President of the Concordia German Choir resides in Kyle Bay.

All content from Kiddle encyclopedia articles (including the article images and facts) can be freely used under Attribution-ShareAlike license, unless stated otherwise. Cite this article:
Kyle Bay, New South Wales Facts for Kids. Kiddle Encyclopedia.