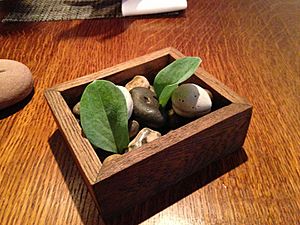 L'Enclume (pronounced: [lɑ̃.klym], French for "the anvil") is a restaurant opened in 2002 in Cartmel, Cumbria, England, run by chef Simon Rogan and his partner Penny Tapsell. L'Enclume received a rating of 10 out of 10 five times in the Good Food Guide and named their top restaurant for the fourth consecutive year in the 2017 guide, and placed second in the 2018 guide. It has received two Michelin stars and five AA Rosettes.

Following many years working as a chef, Rogan was keen to open his own restaurant and in 2002 whilst living in Littlehampton, he was told about an 800-year-old former smithy in Cartmel available to rent. Despite having never considered this location for a restaurant and hoping to open a restaurant closer to London between Brighton and the New Forest, Rogan made an offer for the property on the way home after visiting it and opened L'Enclume in 2002 with his partner Penny Tapsell. The name of the restaurant, meaning "anvil", is homage to the former blacksmith's workshop it is located within.

Most of the produce supplied to the restaurant is grown on Rogan's nearby twelve acre farm. The farm grows a variety of vegetables, herbs, edible flowers and rears meat including cows, chickens and pigs. The farm also has a young orchard which will grow a variety of fruit including apples, damsons and pears. Some of the food is also foraged by the restaurant's full-time forager.

L'Enclume was featured in The Trip, a 2010 BBC comedy starring Steve Coogan and Rob Brydon as fictionalised versions of themselves doing a restaurant tour of northern England.

The restaurant serves a 20-course tasting menu which has developed from the use of wild herbs and flowers, with Rogan inspired by chefs such as Marc Veyrat who uses plants and herbs from the Alps in his cooking. Rogan places importance on how ingredients are grown, saying: "It's a case of growing the perfect carrot rather than cooking it perfectly. My dream menu would serve 20 raw courses, but I know [he laughs] I'd never get away with that."

All content from Kiddle encyclopedia articles (including the article images and facts) can be freely used under Attribution-ShareAlike license, unless stated otherwise. Cite this article:
L'Enclume Facts for Kids. Kiddle Encyclopedia.