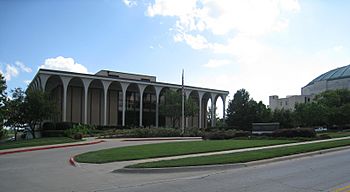 The LDS "Mormon" Visitors Center, Independence, Missouri (dedicated on May 31, 1971) is a visitors center owned and operated by The Church of Jesus Christ of Latter-day Saints (LDS Church) in Independence, Missouri. The center is situated on the Greater Temple Lot dedicated and purchased by Joseph Smith and his associates in 1831, only a few yards from the Church of Christ (Temple Lot)'s headquarters and the Community of Christ Temple.

The property upon which the Visitors Center stands was first purchased on December 19, 1831 by Edward Partridge, acting on behalf of Joseph Smith. It was repurchased by the LDS Church, which had become the largest of several different Latter Day Saint denominations, on April 14, 1904. The purchase was completed by James G. Duffin, President of the Central U.S. States Mission, acting on behalf of the First Presidency. 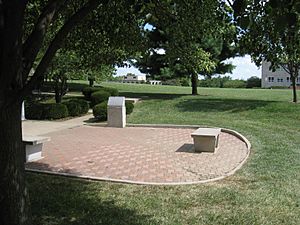 View southward from the Community of Christ's Stone Church (Independence, Missouri), of that portion of the "Temple Lot" owned by the Temple Lot church. This view shows the roof of the LDS Visitors Center, and its proximity to the elevated portion of the, Temple Lot.

A few months later, the Kansas City Times published a rumor (but corrected itself the next day) that the so-called "Utah Mormons" had secretly purchased the entire Greater Temple Lot, including that portion owned by the Church of Christ (Temple Lot), which had been the subject of a lawsuit in the 1890s between the Temple Lot and (then) RLDS churches. The portion owned by the Temple Lot church was the highest-altitude 2.5 acres (10,000 m2) portion of the 63.5 acres (257,000 m2) originally purchased by Partridge in December, 1831, and had been repurchased by Granville Hedrick, founder of the Temple Lot church, between 1867 and 1877. Both pieces of real estate are often confused, because since 1867 both the 2.5-acre (10,000 m2) area and the larger 63.5-acre (257,000 m2) area have been described in newspaper and other media reports as the "Mormon Temple Lot." A January 2009 online article by Community of Christ researcher John Hamer entitled "The Temple Lot: Visions and Realities" helps clear up the confusion.

The Visitors Center opened in 1971, the same year as another particularly notable LDS Visitors Center, the LDS Visitors Center in Nauvoo, Illinois. Its style of presenting Mormon claims and doctrines in a modern audio-visual and interactive format was specifically the brainchild of LDS general authority Bernard P. Brockbank, who had overseen implementation of this same style at the 1964 New York World's Fair.

Theories on future use

The Visitors Center is alleged to have been designed after the Parthenon, one of the world's most renowned temples. This has fueled speculation as to whether the LDS Visitors Center is, by definition, a temple constructed on the Greater Temple Lot dedicated and purchased by Joseph Smith and his associates for that purpose in 1831. An October 1952 Kansas City Times essay written by a friend and admirer of RLDS Church Historian Heman C. Smith (1850 - April 17, 1919) published the rumor that the LDS Church intended to build an LDS Temple on the site today occupied by the LDS Visitors' Center. In his 2004 book Images of New Jerusalem author Craig S. Campbell examines the rumor, but is skeptical the building may be "converted someday" into an LDS Temple.

All content from Kiddle encyclopedia articles (including the article images and facts) can be freely used under Attribution-ShareAlike license, unless stated otherwise. Cite this article:
LDS Visitors Center, Independence, Missouri Facts for Kids. Kiddle Encyclopedia.