Heavy damage from the 1933 Long Beach earthquake meant the last operating years of the station were spent in a state of disrepair as portions of the building had to be removed for the safety of passengers. When Union Station opened in 1939, Santa Fe moved all of its passenger services there and the building was demolished in 1946.

Santa Fe opened La Grande Station on July 29, 1893. The station was unique for Southern California with its Moorish-inspired architecture.

After the 1933 Long Beach earthquake, the station's dome was removed. The station continued to serve as Santa Fe Railway's LA passenger terminal (sans dome) until the opening of the new LA Union Station on May 7, 1939. The station was located at 2nd Street and Santa Fe Ave, just south of the First Street viaduct built in 1929 and on the west bank of the LA River. 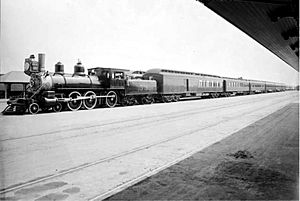 The California Limited, led by engine No. 53, makes a stop at La Grande Station, circa 1899. 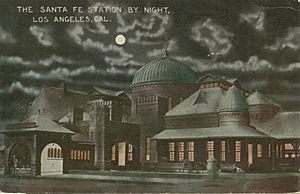 All content from Kiddle encyclopedia articles (including the article images and facts) can be freely used under Attribution-ShareAlike license, unless stated otherwise. Cite this article:
La Grande Station Facts for Kids. Kiddle Encyclopedia.