Construction of the Oakdale Dam began in 1923 and was completed in 1925, damming the waters of the Tippecanoe River. The earthen dam is 58 feet high, has a maximum capacity of 40,540 acre-feet, normal capacity of 26,140 acre feet, and is owned by the Northern Indiana Public Service Company.

Compared to the more commercial lake, Lake Shafer, Lake Freeman remains more privatized and residential. Lake Freeman, is however, home of the Madam Carroll, a pleasure excursion vessel, 36 feet (5.5 m) in width and 135 feet (41/5) in length. 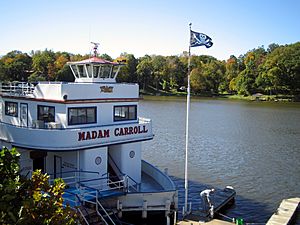 The Madam Carroll on Lake Freeman

Lake Freeman is roughly 1,500 acres (6 km²) in area and has a shoreline of 50 miles (80 km). Depths vary from 7 feet (2 m) to 45 feet (15 m) at the Oakdale Dam. According to his widow, it was named for Rhode Island civil engineer Roger Morse Freeman who was involved in many well known projects; his father John R. Freeman, who he started his career with, was an internationally known engineer.

All content from Kiddle encyclopedia articles (including the article images and facts) can be freely used under Attribution-ShareAlike license, unless stated otherwise. Cite this article:
Lake Freeman Facts for Kids. Kiddle Encyclopedia.