Monticello is a city in Union Township, White County, Indiana, United States. The population was 5,378 at the 2010 census. The city is the county seat of White County.

Monticello is known as a tourist destination in north-central Indiana and is home to the Indiana Beach amusement park, Lake Shafer, and Lake Freeman. 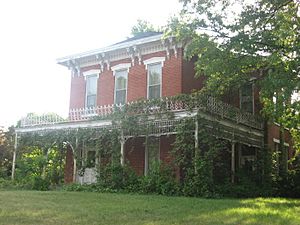 There were 2,179 households of which 31.1% had children under the age of 18 living with them, 42.6% were married couples living together, 13.1% had a female householder with no husband present, 4.9% had a male householder with no wife present, and 39.5% were non-families. 34.6% of all households were made up of individuals and 18.1% had someone living alone who was 65 years of age or older. The average household size was 2.33 and the average family size was 2.99.

There were 2,268 households out of which 29.1% had children under the age of 18 living with them, 48.2% were married couples living together, 10.7% had a female householder with no husband present, and 37.5% were non-families. 32.2% of all households were made up of individuals and 16.5% had someone living alone who was 65 years of age or older. The average household size was 2.40 and the average family size was 3.04.

Monticello was laid out in 1834 as the county seat, with a post office established that year, and is still currently in operation. The city was named after President Thomas Jefferson's estate in Virginia. 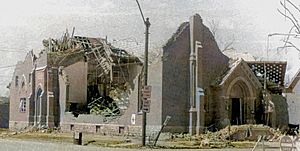 Monticello, Indiana sustained serious damage by a tornado on April 3, 1974, part of the 1974 Super Outbreak that caused death and destruction across the midwest and south. The aftermath of this storm is recorded in the Herald Journal's book, Killer Tornado. The tornado was classified as an F4 on the Fujita scale. This storm killed eight people and was part of tornado family that killed 18, causing an estimated $100 million in damage. In the immediate aftermath of the storm, news outlets reported three hundred deaths across the United States and the creation of temporary morgues. The local paper said the aftermath was similar to a World War II bombing.

On September 2, 2005, Jordan Manufacturing burned down. The company manufactured outdoor furniture such as folding chairs, umbrellas, and seat cushions. Due to the materials used in making these products, four city blocks were contaminated with toxins. The blaze was large enough to require firefighters from seven surrounding communities to battle it and needed approximately "3000 gallons of water per minute for the first three hours of the blaze." While such a fire might not be a big event for a larger city, it had a profound impact on Monticello, as Jordan Manufacturing was one of the few manufacturing plants left in the city after a recession in the 2000s.

The High School was heavily damaged by the 1974 tornado and had to be rebuilt. Students resumed classes in local churches and then in portable units erected near the location of the high school until reconstruction could be completed.

Monticello's location between Lakes Shafer and Freeman and the proximity of Indiana Beach allow for a thriving tourism industry that plays a significant role in the city's economy. Although recreational options are geared primarily towards summer activities, the lakes are used throughout the year for fishing. Golfing and boating are available as three season sports. Additionally, Monticello has areas for cross country skiing, snowmobiling and ice skating in the winter.

All content from Kiddle encyclopedia articles (including the article images and facts) can be freely used under Attribution-ShareAlike license, unless stated otherwise. Cite this article:
Monticello, Indiana Facts for Kids. Kiddle Encyclopedia.