Lake Nicolet (in French: lac Nicolet) is located 50 km south of Victoriaville, in the municipality of Saints-Martyrs-Canadiens, in Arthabaska Regional County Municipality (MRC), in administrative region of Centre-du-Québec, Canada.

Lake Nicolet is the source of the Nicolet River which flows 137 kilometres (85 mi) to the southeast shore of lake Saint-Pierre, in Nicolet. The latest is crossed through the North-East by the St. Lawrence River.

This lake is surrounded by Chemin du Lac-Nicolet (north-west side) and Chemin Gosford-Sud (south-east side). 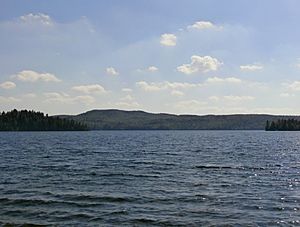 Lake Nicolet is 5.1 kilometres (3.2 mi) long and 1.7 kilometres (1.1 mi), resembling a misshapen crescent surrounded by mountains. It has seven islands: Boulanger, Baril, Linke, L'Heureux, à Michel-Rheault, Rolland and a little unnamed island. The main mountain peaks around the lake are: Brûlé Mountain (500 metres (1,600 ft)) at 1.5 kilometres (0.93 mi) on the south side of the bay leading to the mouth of the lake; a 419 metres (1,375 ft) vertex on the west side and another on the southeast side (492 metres (1,614 ft)). This lake has a hundred chalets all around.

The toponym "Lac Nicolet" was made official on December 5, 1968 at the Commission de toponymie du Québec.

All content from Kiddle encyclopedia articles (including the article images and facts) can be freely used under Attribution-ShareAlike license, unless stated otherwise. Cite this article:
Lake Nicolet Facts for Kids. Kiddle Encyclopedia.