The Nicolet River (French: Rivière Nicolet) is a river in Quebec, Canada. It is a tributary of the Saint Lawrence River on its southern shore and flows into Lake Saint Pierre. It is named in honor of the pioneer Jean Nicolet.

It has several tributaries including the River Bulstrode and the Nicolet River Southwest. Its watershed is mainly in the Centre-du-Québec region although the Southwest Nicolet rises in Estrie. The city of Nicolet is near its mouth on the lake Saint-Pierre which is crossed to the northwest by the St. Lawrence River. 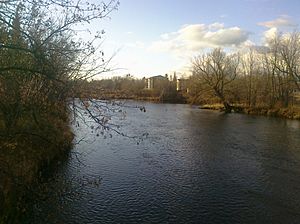 The Nicolet Southwest River, one of the tributaries of the Nicolet at Kingsey Falls

The Nicolet River begins its course from 137 kilometres (85 mi) at an altitude of approximately 350 metres (1,150 ft) in lake Nicolet, at Saints-Martyrs-Canadiens. It then flows in a northwesterly direction to Nicolet where it flows into lac Saint-Pierre. 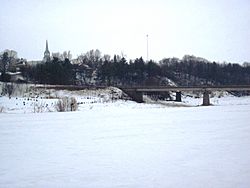 The part upstream of Saint-Léonard-d'Aston is part of the Appalaches. The subsoil is composed of sedimentary rocks folded and metamorphosed (shale, slate and sandstone), volcanic rocks (basalt) and ultramafic rocks (Serpentine and asbestos). As for the section downstream from Saint-Léonard-d'Aston, it is composed of sedimentary rocks (schist, dolomite, limestone, sandstone) in horizontal strata of the St. Lawrence Lowlands.

The basin was inhabited by 96665 inhabitants in 2003. The territory is included in 37 municipalities. The main towns in the basin are Victoriaville (39799 inhabitants), Nicolet (7963 inhabitants) and Asbestos (6627 inhabitants). 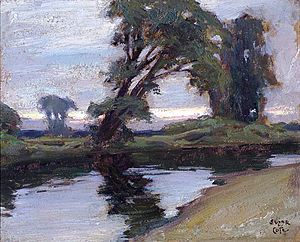 The river was initially baptized Rivière Du Pont by Samuel de Champlain in 1609 to honor his friend François Gravé, sieur du Pont. It also bore the name of Gast river, in honor of Pierre Dugua de Mons (general of New France) and Monet River, in honor of Pierre Monet, sieur de Moras. As for its current name, it owes it to the explorer Jean Nicolet. They also bore the name of the first lords of Nicolet, namely Laubia and Cressé. The Abenakis call it Pithiganitekw, which means 'river of the entrance', due to the fact that it flows near the outlet of lake Saint-Pierre.

The toponym "rivière Nicolet" was made official on December 5, 1968 at the Commission de toponymie du Québec.

All content from Kiddle encyclopedia articles (including the article images and facts) can be freely used under Attribution-ShareAlike license, unless stated otherwise. Cite this article:
Nicolet River Facts for Kids. Kiddle Encyclopedia.