Victoriaville is a city in central Quebec, Canada, on the Nicolet River. Victoriaville is the seat of Arthabaska Regional County Municipality and a part of the Centre-du-Québec (Bois-Francs) region. It was formed in 1993 by the merger of Arthabaska, Saint-Victoire-d'Arthabaska and Victoriaville, with the name of the latter being used for the new merged city.

Victoriaville's size and location have earned it the title Capitale des Bois-Francs, referring to the Bois-Francs region of the province. Victoriaville produces numerous hardwood products, including furniture, caskets, and hockey sticks. 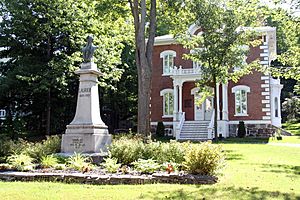 The Parc-Linéaire Des Bois-Francs bike trail traverses Victoriaville. There are many paths for cyclists throughout the city, including ones leading to the summit of Mont Arthabaska, at the southern limits of the city. The Laurier Museum commemorates the summer home of former Canadian Prime Minister Sir Wilfrid Laurier and is a National Historic Site of Canada.

Many festivals are held throughout the year including the Week-end En Blues series of concerts, the Festival International de Musique Actuelle de Victoriaville (FIMAV) in the spring, and the Exposition Agricole in the summer.

Investment in the industrial park has buoyed the town and spurred new residential and commercial development. It is the home of a prominent Lactantia dairy factory, two shopping malls ("La Grande Place des Bois-Francs" and "Le Carrefour des Bois-Francs", this one has been renamed and became "le Centre de Victoriaville"), the Cégep de Victoriaville, and a quaint yet vibrant downtown core/shopping area on Rue Notre-Dame. Victoriaville Airport, located at the town's northern limits close to Route 116, is a regional airport that receives business flights and light private planes.

The current mayor of Victoriaville is Alain Rayes, who was elected in November 2009 and is also the Conservative Party Candidate for the Richmond-Arthabaska riding in upcoming the 2015 federal election.

Victoriaville is the seat of the judicial district of Arthabaska. 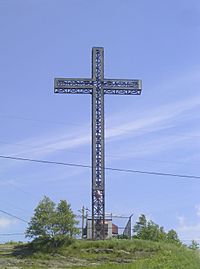 Cross on top of Mount Arthabaska remade in 1929.

The Victoriaville area was known to the native Abenaki peoples as Arthabaska or Awabaska, meaning "place of bulrushes and reeds". The area was first claimed in 1802 by a fur trader named John Gregory; the first settlers began arriving several decades later, beginning around 1825. Early colonists from the banks of the Saint Lawrence River arrived slowly, blazing trails as they went; the first provincial road would be built in 1844. The parish of Saint-Christophe d'Arthabaska was established in 1851, an event that many see as marking the town's true foundation. In 1854 a train station was erected to serve the Grand Trunk Railway line from Richmond to Lévis, uniting the region with Montreal and Quebec City. The municipality of Victoriaville itself was created on May 8, 1861, named to honour Queen Victoria, the reigning monarch at the time. Victoriaville became a full-fledged town in 1890, having reached a population of 1,000.

Among the many milestones in the growth of Victoriaville are the establishment of a hospital, the Hôtel-Dieu d'Arthabaska, in 1931; the opening of a seminary, the Collège du Sacré-Coeur, in 1942; the creation of a school specialized in cabinet making and woodworking, the École Québécoise du Meuble et du Bois Ouvré (ÉQMBO), in 1965; and the inauguration of the Cégep de Victoriaville in the space previously occupied by the Collège du Sacré-Coeur, in 1969. Train service through Victoriaville was discontinued in 1960; the disused train tracks were eventually removed and the space was transformed into bicycle paths, forming the Parc Linéaire — with a "Vélogare" replacing the old station.

In June 1993, after a referendum on amalgamation, the municipalities of Sainte-Victoire-D'Arthabaska, Arthabaska and Victoriaville merged to form the city of Victoriaville. The aboriginal name "Arthabaska", unique and well-appreciated by residents, was retained in several ways, notably in the name of the regional county municipality and in the name of the highest (and only) mountain that overlooks the city; as well, in 2004, the section of Route 116 that passes through Victoriaville was renamed boulevard Arthabaska.

Most residents speak French as their first language.

All content from Kiddle encyclopedia articles (including the article images and facts) can be freely used under Attribution-ShareAlike license, unless stated otherwise. Cite this article:
Victoriaville Facts for Kids. Kiddle Encyclopedia.