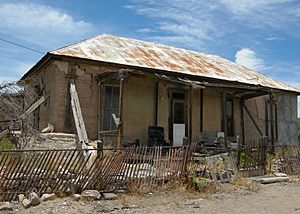 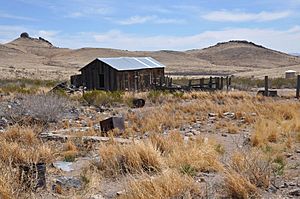 The 'heyday' of the town was from 1881 to 1893. The last resident departed in 1994. The present day ghost town is deserted, except for two caretakers that are on site at all times.

The townsite of Lake Valley is partly privately owned, and partly owned by the U.S. Bureau of Land Management, which has restricted access to the old buildings to daylight hours, to prevent vandalism. There is a self-guided walking tour for visitors. 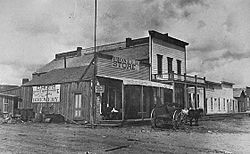 A rancher found the Lake Valley silver deposits in Sierra County in 1876. Two years later he sold his claims to an engineer, who began mining. The deposits are bedded manto-type deposits in Paleozoic limestone. The mines produced well for a few years after miners tunneled into a silver-lined cavity they named the “bridal chamber” that alone yielded 2.5 million troy ounces (78 tonnes) of silver.

In 1881, a party of Lake Valley miners formed a posse to pursue a band of Apaches that had raided the town of Hillsboro. The Apaches caught them in an ambush. The bridal chamber was worked out by 1883. Although a railroad line reached Lake Valley in 1884, the mines struggled and were worked only periodically into the 20th century. Total production of the Lake Valley district through 1931 was 5.8 million ounces (180 tonnes) of silver. The mines reopened during World War II to produce manganese, and continued operating into the 1950s. Lake Valley had a post office from 1882 until 1955.

All content from Kiddle encyclopedia articles (including the article images and facts) can be freely used under Attribution-ShareAlike license, unless stated otherwise. Cite this article:
Lake Valley, Sierra County, New Mexico Facts for Kids. Kiddle Encyclopedia.