The Village of Lakewood is a village in McHenry County, Illinois, United States. It was incorporated as a village on July 10, 1933. The population was 3,811 at the 2010 census. Although commonly referred to as Lakewood, the town's proper name is preceded by 'The Village of'.

The Village covers just under 4 square miles (10 km2). There are about 650 acres (2.6 km2) of open space, which equals about 3/4 acre per household. There are 6 lakes, including Crystal Lake which is situated partially in the Village and partially in the City of Crystal Lake, Illinois. The Village is home to two golf courses and several natural areas or wetlands, including the Kishwaukee Fen Nature Preserve. There are also a number of public and private parks and beaches within the Village, as well as walking and bicycle paths and permanent open spaces in the newer subdivisions. Lakewood's recreational areas are West Beach, Crystal Lake, and a number of parks that dot the area.

Small parks, beaches, and boat docks along Crystal Lake's South Shore are private and maintained for use by members of the Country Club Additions Property Owners Association (CCAPOA). This is a homeowners association-like entity for Lakewood houses from approximately Country Club Road (named for Crystal Lake Country Club just to the south) and extending to the south lakeshore. Roads in this lakeside area have decorative posts on the corner of streets intersecting Lake Shore Drive and are called "Gates", such as "Gate 7". The CCAPOA parks take their names from these gates, so a lakeside park would be called "Gate 7 Beach" locally. 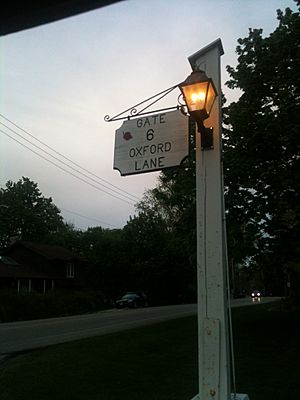 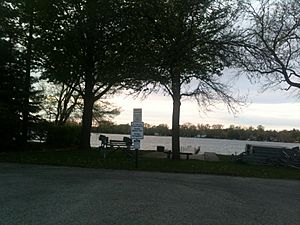 There were 815 households, out of which 39.0% had children under the age of 18 living with them, 80.5% were married couples living together, 5.4% had a female householder with no husband present, and 13.4% were non-families. 11.5% of all households were made up of individuals, and 4.8% had someone living alone who was 65 years of age or older. The average household size was 2.87 and the average family size was 3.09.

All content from Kiddle encyclopedia articles (including the article images and facts) can be freely used under Attribution-ShareAlike license, unless stated otherwise. Cite this article:
Lakewood, Illinois Facts for Kids. Kiddle Encyclopedia.