In 1976, the inaugural Lakota Nation Invitational (LNI) was held at Pine Ridge High School. The basketball tournament developed out of tensions resulting from the American Indian Movement’s occupation of Wounded Knee in 1973.

In 1973, Itancan Bryan Brewer was a basketball coach at Pine Ridge School. The American Indian Movement. wanted the U.S. government to honor the treaties, which, they believed, had been broken. The occupation, which included the site of the 1890 massacre, set off an intense dispute between A.I.M. supporters and a private paramilitary group funded by the existing tribal leadership, whom the A.I.M. had accused of corruption. In the three years following the seventy-one-day occupation, stabbings, shootings, and beatings related to the conflict became common.

Following American Indian Movement’s occupation, Athletic directors from school districts across South Dakota refused to let their athletes play basketball with students from Pine Ridge. Itancan Bryan Brewer decided to start a tournament of his own.

Brewer contacted schools in other states to play in the tournament. Seven schools agreed to compete in the 1976 tournament, which packed the Pine Ridge gymnasium. Three years later, the tournament relocated to the recently constructed Rushmore Plaza Civic Center Arena in order to better accommodate large crowds of spectators.

The tournament has seen significant growth and changes since its inception. Originally a gathering just for basketball games, the tournament now boasts a variety of events including traditional Lakota hand games, knowledge and language bowls, a student art show, a business plan competition and chess tournament. 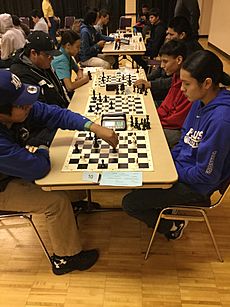 All content from Kiddle encyclopedia articles (including the article images and facts) can be freely used under Attribution-ShareAlike license, unless stated otherwise. Cite this article:
Lakota Nation Invitational Facts for Kids. Kiddle Encyclopedia.