Lance James Henriksen (born May 5, 1940) is an American actor, voice actor and artist. He is best known for his roles in science fiction, action and horror films, such as that of Bishop in the Alien film franchise, and Frank Black in Fox television series Millennium. He provided the voices for Kerchak the gorilla in the 1999 Walt Disney Feature Animation film Tarzan and Fleet Admiral Steven Hackett in BioWare's Mass Effect video game trilogy.

Henriksen was born in Manhattan. His father, James Henriksen, was a Norwegian merchant sailor and boxer nicknamed "Icewater" who spent most of his life at sea. His mother, Margueritte Werner, struggled to find work as a dance instructor, waitress and model. His parents divorced when he was two years old, and his mother raised him and his brother.

Growing up, Henriksen had a reputation for getting into trouble in the various schools he attended, and even spent time in a children's home. He left school after completing first grade. He served in the United States Navy from 1955–58 and attained the rank of Petty Officer Third Class.

Henriksen found work as a muralist and as a laborer on ships. For a time, he worked in Europe. His first theater work, around age 30, was as set designer, and he received his first acting role because he built the set for a production. Illiterate until then, it was around this time that he taught himself to read. For his first role, he put the entire script to tape with the help of a friend, learning everyone's part in addition to his own. Soon afterward, he graduated from the Actors Studio and began acting in New York City.

Henriksen's first film appearance was in It Ain't Easy in 1972. It was followed by supporting roles in a variety of films, including Dog Day Afternoon (1975), Close Encounters of the Third Kind (1977), and Damien: Omen II (1978). He played Police Chief Steve Kimbrough in Piranha Part Two: The Spawning (1982), the astronaut Walter Schirra in The Right Stuff (1983), and actor Charles Bronson in the television film Reason for Living: The Jill Ireland Story (1991).

When James Cameron was writing The Terminator (1984), he originally envisioned Henriksen, with whom he had worked on Piranha II: The Spawning, playing the title role, a cyborg. The role ultimately went to Arnold Schwarzenegger. Henriksen does appear in the film in the supporting role of Vukovich, a member of the Los Angeles Police Department. 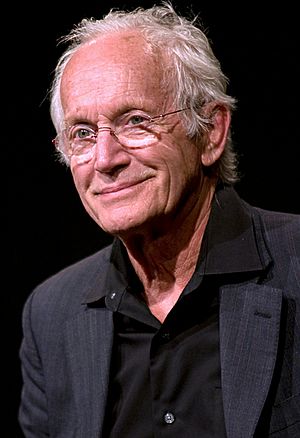 Henriksen played the android Bishop in Cameron's films Aliens (1986), and as Bishop's unnamed designer in Alien 3 (1992). He also played Charles Bishop Weyland, the man upon whom Bishop was based, in Alien vs. Predator (2004). He played the vampire leader Jesse Hooker in Kathryn Bigelow's cult film Near Dark.

He portrayed gunfighters in the Westerns Dead Man and The Quick and the Dead, and appeared with British actor Bruce Payne in Aurora: Operation Intercept in 1995. He appeared with Payne again in Face the Evil (1997), and the dystopian classic Paranoia 1.0 (2004). That year, he also played Sheriff Doug Barnum in the film Powder.

In 1996, Henriksen starred in the television series Millennium, created and produced by Chris Carter, the creator of The X-Files. Henriksen played Frank Black, a former FBI agent who possessed a unique ability to see into the minds of killers. Carter created the role specifically for the actor. His performances on Millennium earned him critical acclaim, a People's Choice Award nomination for Favorite New Male TV Star, and three consecutive Golden Globe nominations for Best Performance by an Actor in a TV Series (1997–1999). The series was cancelled in 1999. On television, Henriksen appeared in the ensemble of Into the West (2005), a miniseries executive-produced by Steven Spielberg. He appeared in a Brazilian soap opera, Caminhos do Coração (Ways of the Heart) from Rede Record, aired in 2007–2008. Henriksen guest-starred on a Season 6 episode of NCIS (2009) playing an Arizona sheriff, and appeared in a recurring role as The Major on NBC's The Blacklist. 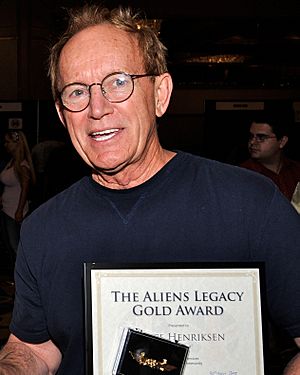 In the years after Millennium, Henriksen has become an active voice actor, lending his distinctive voice to a number of animated features and video game titles. In Disney's Tarzan (1999) and its direct-to-video followup, he is Kerchak, the ape who serves as Tarzan's surrogate father. He provided the voice for the alien supervillain Brainiac in Superman: Brainiac Attacks (2006) and for the character Mulciber in Godkiller (2009). Henriksen is the voice of the character Molov in the video game Red Faction II (2002) and has also contributed to GUN (2005), Run Like Hell (2002), the canceled title Four Horsemen of the Apocalypse (2004), and the role-playing game Mass Effect (2007) as Admiral Hackett of the Human Systems Alliance. Henriksen was also the voice behind PlayStation 3's internet promotional videos.

In 2005, Henriksen was the voice of Andrei Rublev in Cartoon Network's IGPX. The actor lent his voice to the animated television series Transformers: Animated as the character Lockdown. In 2009, Henriksen voiced Lieutenant General Shepherd in the award-winning game Call of Duty: Modern Warfare 2. He would later voice Karl Bishop Weyland in Aliens vs. Predator; also, this character's appearance resembles Henriksen's. Henriksen voiced Master Gnost-Dural in Star Wars: The Old Republic, and he also reprised his role as Admiral Hackett in Mass Effect 3. He is also the narrator of the recent Verizon Droid commercials. Recently, Henriksen reprised his role as Bishop in Aliens: Colonial Marines.

Henriksen maintains a prominent role in live action television. He has starred in a 2003 series of Australian television commercials for Visa, titled Unexplained (about the raining of fish from the sky over Norfolk) and Big Cats (about the Beast of Bodmin Moor). In these commercials, Henriksen speaks as a Frank Black-type character about these phenomena as Mark Snow-inspired mysterious music plays in the background, as a link to Henriksen's TV series Millennium. Unexplained went on to a gold world medal at the 2004 New York Festivals.

In addition to his television and voice acting work, Henriksen continues to be active in film. He made a cameo appearance in the 2009 horror comedy Jennifer's Body, and starred in the After Dark Horrorfest film, Scream of the Banshee, released in 2011. He played Henry Gale in Leigh Scott's The Witches of Oz.

In January 2015, he was signed for the lead in the indie thriller Monday at 11:01 A.M. In 2016, he starred in the feature film Deserted, a psychological thriller. Henriksen played the role of Hopper.

In October 2018, Henriksen was signed for one of the two leads in Falling, the directorial debut of actor Viggo Mortensen, who also wrote, produced and co-starred. Reviewing the film's 2020 premiere, The Hollywood Reporter's John DeFore noted not only the quality of Henriksen's performance, but the all too infrequent opportunity Mortensen's script presented. "[F]ew moviegoers who've enjoyed him over the years will be surprised, but many will resent that we, and he, have waited so long for a role like this."

Henriksen continues to produce art. He worked as a muralist before he became an actor, and he has worked with clay since 1960. In September 2017, Henriksen set up a website to showcase and find homes for some of his most recent clay works. He "still believes that there is nothing as simple and beautiful as raw clay... And that Potters have the remaining soul of the nomads...always searching...."

Henriksen has married three times. He was first married to Louise Lunde. He was then married to Mary Jane Evans from 1985 to 1989. He was finally married to Jane Pollack from 1995 to 2006.

Henriksen has four children. Two sons with Louise Lunde, Thiise and Lawrence Henriksen. His son Lawrence died in 1995. He has one grandson, Thiise Brok Henriksen. Though uncredited, his daughter Alcamy appears in an episode of the TV series Millennium. After Millennium ended its run, Henriksen moved to Hawaii with his then-wife Jane Pollack and their child Sage Ariel.

All content from Kiddle encyclopedia articles (including the article images and facts) can be freely used under Attribution-ShareAlike license, unless stated otherwise. Cite this article:
Lance Henriksen Facts for Kids. Kiddle Encyclopedia.