The Land's End Historic District encompasses a well-preserved enclave of summer residences built in the early 20th century in the Port Clyde area of St. George, Maine. Developed between 1907 and 1919 by Russell W. Porter, it includes an architecturally eclectic mix of modestly scaled cottages. The district was listed on the National Register of Historic Places in 2011.

The town of St. George occupies a peninsula and islands on the west side of Penobscot Bay in the Mid Coast region of southern Maine. The southernmost mainland tip of the peninsula is Marshall Point, where the Marshall Point Light is located. The finger of land between the lighthouse and the village of Port Clyde is where the Land's End colony is located. The colony, unlike other such developments on the Maine coast, consists of a collection of stylistically diverse summer houses. Although the Shingle and Craftsman styles predominate, there are also fine examples of the English Colonial Revival and the French chalet style. 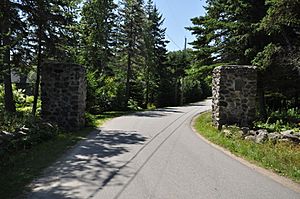 The gates at the entrance to Land's End

The Land's End colony was founded in 1907 by Russell W. Porter, an artist, amateur astronomer, and Arctic explorer. After participating in a series of Arctic exploratory expeditions, Porter sought a retreat where he engage pursuits in astronomy and art, and chose the area south of the fishing village of Port Clyde. He spent $950 to purchase the entire peninsula, platted it out for development, and built a number of the cottages. He specifically sought to harmonize the buildings with the surrounding environment, including natural features such as pergolas finished in tree bark, and unfinished wooden interiors. Porter's own house, a stone structure in the English Revival style, includes a rounded section in which he intended to mount a telescope. Porter's experiment came to an end in 1919, when he left for California to assist in the construction of the Mount Palomar Observatory.

All content from Kiddle encyclopedia articles (including the article images and facts) can be freely used under Attribution-ShareAlike license, unless stated otherwise. Cite this article:
Land's End Historic District Facts for Kids. Kiddle Encyclopedia.