Lands End is a park in San Francisco within the Golden Gate National Recreation Area. It is a rocky and windswept shoreline at the mouth of the Golden Gate, situated between the Sutro District and Lincoln Park and abutting Fort Miley Military Reservation. A memorial to USS San Francisco stands in the park. Numerous hiking trails follow the former railbeds of the Ferries and Cliff House Railway along the cliffs and also down to the shore.

Additionally, Lands End contains the ruins of the Sutro Baths. Other historic sites include numerous shipwrecks, which are visible at low tides from the Coastal Trail and Mile Rock.

The Yelamu Ohlone tribe lived at Lands End before Spanish settlement began in 1776. After the Gold Rush, entrepreneurs designed the new Cliff House as a fashionable resort for the wealthy. A private company constructed a new road called Point Lobos Avenue. By the 1860s, a horse-drawn stagecoach made the trip every Sunday from crowded downtown San Francisco out to Lands End. During the 1880s, millionaire Adolph Sutro constructed a passenger steam train from downtown to Lands End for the affordable fare of 5¢. In 1891, an old miner called Charles Jackson announced that he had discovered a vein of bituminous coal under the cliffs at Baker Beach, on Sutro's land; Sutro had a tunnel dug 200 feet under the railroad track and confirmed the find, but the mine was never exploited and is hard to access today as a result of landslides. 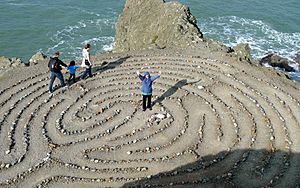 The Hidden Labyrinth at Eagle's Point, 2011

Along the Coastal Trail at Eagle's Point, local artist Eduardo Aguilera constructed a "hidden labyrinth" overlooking Golden Gate Bridge in 2004. It has been vandalized numerous times and was destroyed in August 2015, but was rebuilt a month later by the artist with the help of 50 volunteers.

All content from Kiddle encyclopedia articles (including the article images and facts) can be freely used under Attribution-ShareAlike license, unless stated otherwise. Cite this article:
Lands End (San Francisco) Facts for Kids. Kiddle Encyclopedia.