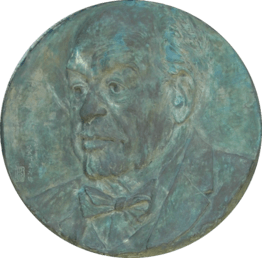 Langdon Warner (1881–1955) was an American archaeologist and art historian specializing in East Asian art. He was a professor at Harvard and the Curator of Oriental Art at Harvard’s Fogg Museum. He is reputed to be one of the models for Steven Spielberg's Indiana Jones. As an explorer/agent at the turn of the 20th century, he studied the Silk Road. He was elected a Fellow of the American Academy of Arts and Sciences in 1927.

Warner graduated from Harvard College in 1903 with a specialty in Buddhist art and an interest in archeology. After several field trips to Asia, he returned to Harvard, where he taught the university's first courses in Japanese and Chinese art. The Smithsonian Institution sent him to Asia in 1913, and he spent more than a year there, but World War I interrupted his work. In 1922 the Fogg Museum again sent him to China.

Warner's archaeological career was interrupted by the United States' entry into World War II and he became part of the Monuments, Fine Arts and Archives (MFAA) Section of the U.S. Army. He was brought on as an advisor to the MFAA Section in Japan from April to September 1946.

He has been given credit by some for advising against firebombing and the use of the atomic bomb on Kyoto, Nara, and Kamakura and other ancient cities to protect cultural heritage of Japan. There are monuments erected in Kyoto, Hōryū-ji (outside the western edge of Hōryū-ji temple), and Kamakura (outside Kamakura JR Station) in his honor for this reason. However, Otis Cary has argued that the credit for sparing Japan's cultural heritage sites belongs not to Langdon but to the U.S. Secretary of War, Henry L. Stimson.

All content from Kiddle encyclopedia articles (including the article images and facts) can be freely used under Attribution-ShareAlike license, unless stated otherwise. Cite this article:
Langdon Warner Facts for Kids. Kiddle Encyclopedia.