Langley Park is an open space in the central business district of Perth, Western Australia. Running alongside Riverside Drive, it is grassed, rectangular in shape and has dimensions 900 x 100 m (3000 x 300 ft). It was created by reclaiming land from the adjacent Swan River between 1921 and 1935, to provide open space near the city.

As a pioneer of civil aviation in Western Australia, Major Norman Brearley used the park as an airstrip in the 1920s. That tradition continues with "fly-ins", where small aircraft land in the park. In 2003, to celebrate 100 years of powered flight, 10 aircraft – one representing each decade of the 20th century – landed. Aircraft have also used the park to perform emergency landings. In 1997 a Tiger Moth TMK had an engine failure and put down in the park. While not an official airfield, Langley Park makes Perth a place where fixed-wing aircraft can land in proximity to the central business district. 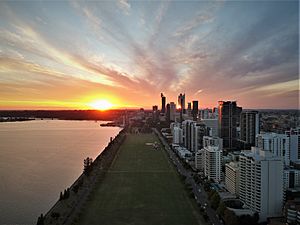 Langley Park's location makes it a popular place to view the annual Lotterywest Skyworks, which are held over the river. The Telstra Rally Australia World Rally Championship held events at the park for 11 years from 1992 to 2002, and once more in 2005.

During November 2006, 2007 and 2008, the final stage of the Red Bull Air Race World Series was held over the Swan River and Perth Water, using Langley Park as the airfield.

Cirque du Soleil has used the park many times to set up its big top for its shows whenever a big top touring production visits Australia. Shows performed at Langley park are: Saltimbanco, Alegria, Quidam, Dralion, Ovo.

On 30 September 2018, the park was the site of the West Coast Eagles homecoming celebrations after winning the 2018 AFL Grand Final.

All content from Kiddle encyclopedia articles (including the article images and facts) can be freely used under Attribution-ShareAlike license, unless stated otherwise. Cite this article:
Langley Park, Perth Facts for Kids. Kiddle Encyclopedia.