Perth Water is a section of the Swan River on the southern edge of the central business district of Perth, Western Australia. It is between the Causeway to the east, and Narrows Bridge to the west – a large wide but shallow section of river, and the northern edge of the suburb South Perth. It is considered a landmark of the City of Perth. 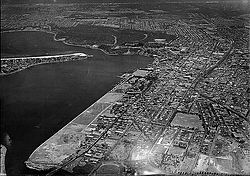 Historically it was much larger in size. The shorelines have been regularly changed.

Considerable reclamation has taken place on both sides of the river. For example, in 1879, landfill of Perth Water was used to create The Esplanade.

For the construction of the Narrows Bridge and its approaches, considerable amounts of the north-west section of Perth Water were reclaimed.

In 2006, the last race in the Red Bull Air Race World Series was the first held in Australia, and was held in Perth, with the competition being centred over Perth Water.

It has been the annual site of Australia Day fireworks, with crowds lining the lawns and open space along the foreshores. A good view for these activities has been from Kings Park due to its elevation and position looking across the Perth Water area. Post-cards, calendar images, posters and photographs from most decades of the twentieth century exist, that show the view from the Park looking across Perth Water to the city. 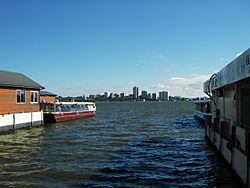 Since the establishment of Perth, there have been either jetties or landing and mooring facilities at the location of Barrack Square at the jetty. The long running Transperth ferry service travels between Perth and the Mends Street Jetty in South Perth. Commercial companies also use the jetties for trips to Rottnest via Fremantle, and Swan River wine and leisure cruises.

Ferry companies at the terminal have improved re-fuelling techniques to reduce the amount of oil pollution in Perth Water.

The most accessible photographs that show the degradation of the space over time is in the collection in The West Australian book produced for the 150th anniversary of Western Australia in 1979. 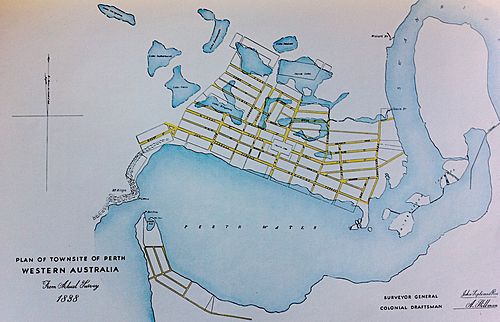 In 1989, the Department of Aboriginal Sites published a book with a reproduction of a 1909 cancelled plan of Perth that shows place names:

This body of water is also known as Derbarl Yerrigan, a name which has since been adopted for the whole of the Swan River. In the Noongar language, Derbarl refers to the estuary water and Yerrigan is "rising up".

The earlier shore line of Perth Water can be identified by the line made by Mounts Bay Road, and its extension to The Esplanade.

From some earlier photographs and images made from Kings Park it is possible to ascertain the earlier river-edges, or banks, from tree lines. The photo here is of the part of the river that was filled in to accommodate the Narrows Bridge works.

Perth Water in 2015 from Kings Park, showing the navigable channel close to the north shore

The main route for deep draught boats to navigate Perth Water is from the Narrows Bridge to Barrack Street Jetty, then following a channel close to the north shore parallel to Riverside Drive.

The channel was dredged from as early as 1908 to keep the South Perth to Perth ferry channel clear; such maintenance is an ongoing issue.

All content from Kiddle encyclopedia articles (including the article images and facts) can be freely used under Attribution-ShareAlike license, unless stated otherwise. Cite this article:
Perth Water Facts for Kids. Kiddle Encyclopedia.