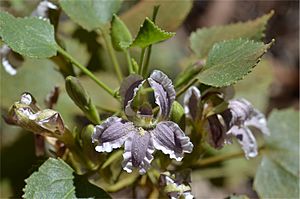 Goodenia grandiflora, commonly known as large-flowered goodenia, pinnate goodenia or mountain primrose, is a species of flowering plant in the family Goodeniaceae and is endemic to Australia. It is an erect under-shrub with toothed, egg-shaped to round leaves and racemes or thyrses of yellow, white or purplish flowers.

Goodenia grandiflora was first formally described in 1805 by John Sims in the Botanical Magazine. The specific epithet (grandiflora) means "large-flowered".

This goodenia grows in rocky places on hills in the Northern Territory, Queensland and eastern New South Wales.

Goodenia grandiflora is classified as "Priority One" by the Government of Western Australia Department of Parks and Wildlife, meaning that it is known from only one or a few locations which are potentially at risk, but as of "least concern" in the Northern Territory and Queensland.

All content from Kiddle encyclopedia articles (including the article images and facts) can be freely used under Attribution-ShareAlike license, unless stated otherwise. Cite this article:
Large-flowered goodenia Facts for Kids. Kiddle Encyclopedia.