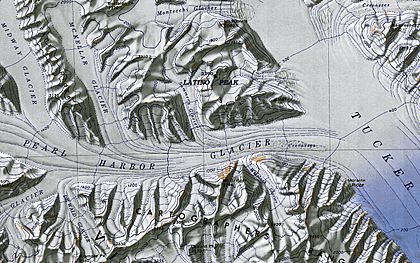 The peak was mapped by the United States Geological Survey from surveys and U.S. Navy aerial photos, 1960–64, and was named by the Advisory Committee on Antarctic Names for Terry L. Latino, a U.S. Navy SeaBee who camped at McMurdo Station on Ross Island as a member the U.S. Navy Antarctic Support summer expeditions of 1965, 1966. He also wintered there as a member of the Operation Deep Freeze Winter-Over party of 1967 and also served in the Vietnam War in 1968–69.

All content from Kiddle encyclopedia articles (including the article images and facts) can be freely used under Attribution-ShareAlike license, unless stated otherwise. Cite this article:
Latino Peak Facts for Kids. Kiddle Encyclopedia.