Leckhampton is a heritage-listed villa at 69 Shafston Avenue, Kangaroo Point, City of Brisbane, Queensland, Australia. It was designed by Alexander Brown Wilson and built from 1889 to 1890 for Charles William Snow. It was added to the Queensland Heritage Register on 21 October 1992. 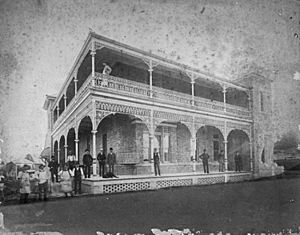 Considered to be the work of noted architect Alexander B Wilson, Leckhampton was built for Charles William Snow shortly after he purchased the land in 1889. Snow was a prominent city jeweller (his son Charles Smethurst Snow was the founder of the Boy Scouts in Queensland). He died in 1913 and the house remained in the Snow family until 1924.

Leckhampton was owned by George and Jessie Hughes from 1924 to 1947.

Leckhampton was converted into flats by the 1960s. In 1984, the building was refurbished as office accommodation. As part of the redevelopment a similarly styled building was constructed next door.

Leckhampton is a two-storeyed brick house with a ribbed iron hipped roof. The front and south-east side of the house are sheltered on both levels by deep verandahs which feature decorative cast-iron balusters, columns and friezes. A square, double-storeyed bay, surmounted by a parapet, projects from the northern corner of the main facade. Entry is through a pedimented doorway which leads to a vestibule hall and stairway lit by an impressive stained glass window. Two single-storeyed enclosed verandahs have been added to the rear. A new paved entertainment and pool area behind the house link Leckhampton with the new building.

Leckhampton was listed on the Queensland Heritage Register on 21 October 1992 having satisfied the following criteria.

Leckhampton provides evidence of an expression of confidence during the 1880s by a prominent businessman and of the earlier affluent residential character of parts of Kangaroo Point.

Leckhampton is significant as an externally intact and aesthetically pleasing example of a large, late nineteenth century, city residence on the southside.

Leckhampton is significant as an externally intact and aesthetically pleasing example of a large, late nineteenth century, city residence on the southside.

All content from Kiddle encyclopedia articles (including the article images and facts) can be freely used under Attribution-ShareAlike license, unless stated otherwise. Cite this article:
Leckhampton, Kangaroo Point Facts for Kids. Kiddle Encyclopedia.