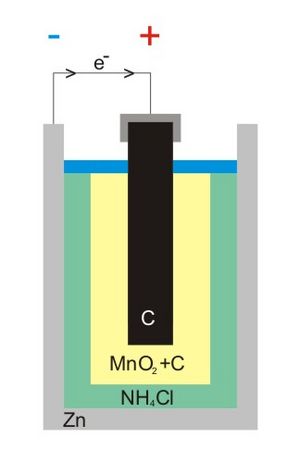 It is normally marketed with the label "Extra Heavy Duty" or "Super Heavy Duty" on it, meaning that some of the electrolytes have been replaced to make it longer lasting. It works by the oxidation of zinc by manganese dioxide. It has a zinc chloride or ammonium chloride electrolyte.

All content from Kiddle encyclopedia articles (including the article images and facts) can be freely used under Attribution-ShareAlike license, unless stated otherwise. Cite this article:
Leclanche battery Facts for Kids. Kiddle Encyclopedia.