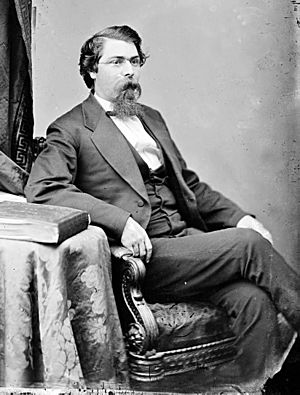 Born in Buffalo, New York, Perce completed preparatory studies. He attended Genesee College, Lima, New York, and was graduated from the Albany Law School in 1857. He was admitted to the bar the same year and commenced practice in Buffalo, New York. In 1859 he travelled to St. Louis, Missouri intending to live there, but he decided that, due to his anti-slavery views, he could never live in a slave state and instead settled in Chicago, Illinois. At the outbreak of the Civil War, he volunteered his services to Governor Yates of Illinois and served for 4 months on General Prentiss' staff in Cairo, Illinois, with the rank of captain. In August 1861 he accepted an offer to join the Sixth Regiment, Michigan Volunteer Infantry and was commissioned a second lieutenant. He was promoted to the rank of captain in June 1862. He was appointed captain in the United States Volunteers in August 1863 and was brevetted lieutenant colonel and colonel in 1865. He settled in Natchez, Mississippi. He was appointed register in bankruptcy in June 1867. Upon readmission of the State of Mississippi to representation, Perce was elected as a Republican to the Forty-first Congress. He was reelected to the Forty-second Congress and served from February 23, 1870, to March 3, 1873. He served as chairman of the Committee on Education and Labor (Forty-second Congress). He was not a candidate for reelection in 1872. He engaged in the practice of law and also in the real estate business at Chicago, Illinois, where he died March 16, 1911. He was interred in Rosehill Cemetery.

All content from Kiddle encyclopedia articles (including the article images and facts) can be freely used under Attribution-ShareAlike license, unless stated otherwise. Cite this article:
Legrand W. Perce Facts for Kids. Kiddle Encyclopedia.