Boronia citriodora, commonly known as lemon-scented boronia, lemon plant or lemon thyme, is a woody shrub that is endemic to Tasmania. It has pinnate leaves and white to pink flowers that are arranged singly or in groups of up to seven, in the leaf axils or on the ends of the branches. 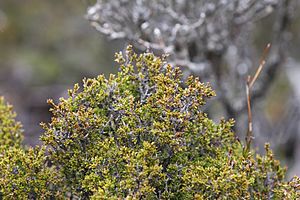 habit in a subalpine sclerophyll woodland

Boronia citriodora was first formally described in 1855 by Joseph Dalton Hooker from an unpublished description by Ronald Campbell Gunn and the description was published in The botany of the Antarctic voyage of H.M. Discovery ships Erebus and Terror. The name is derived from the characteristic lemon scent of the foliage. Hooker noted that the plant has a "strong and delicious smell of lemons" and that the species was called the 'lemon-plant' by early Tasmanian colonists.

Lemon-scented boronia grows in heath, woodland and near rainforest, often in rocky places.

Boronia citriodora is cultivated as an ornamental plant for use in gardens. It tolerates sun, shade, wind, heavy frost; and dry, sandy or waterlogged soils.

All content from Kiddle encyclopedia articles (including the article images and facts) can be freely used under Attribution-ShareAlike license, unless stated otherwise. Cite this article:
Lemon-scented boronia Facts for Kids. Kiddle Encyclopedia.