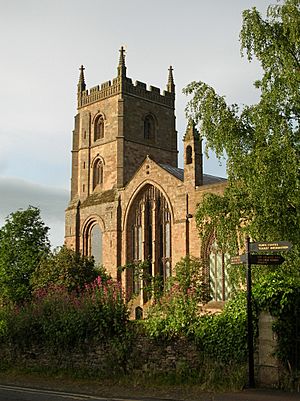 Leominster abbey was an Anglo-Saxon monastery established at Leominster in the county of Hereford, England. The name of the town refers to its minster, a settlement of clergy living a communal life.

The monastery, perhaps founded in the seventh century, was originally a male house. After being destroyed by Danes, it was rebuilt as a Benedictine abbey for nuns (see Leominster nunnery). In 1046 the abbess, Eadgifu, was abducted by Sweyn Godwinson. Eadgifu is only abbess known by name. The convent was probably dissolved or suppressed not long after this incident. 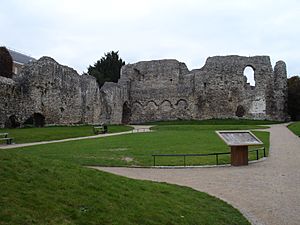 Ruins of Reading Abbey, which founded a priory at Leominster in the 12th century.

In the 12th century Henry I incorporated land at Leominster into the foundation of Reading Abbey. Reading Abbey in turn founded a Benedictine priory in Leominster of which the Priory Church survives at . Whether the priory was built on the site of the original Anglo-Saxon monastery is not clear. However, archaeological evidence of Saxon activity has been uncovered at the priory.

All content from Kiddle encyclopedia articles (including the article images and facts) can be freely used under Attribution-ShareAlike license, unless stated otherwise. Cite this article:
Leominster Abbey Facts for Kids. Kiddle Encyclopedia.