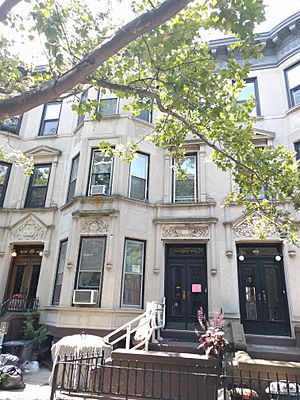 The Lesbian Herstory Archives (LHA) is a New York City-based archive, community center, and museum dedicated to preserving lesbian history, located in Park Slope, Brooklyn. The Archives contain the world's largest collection of materials by and about lesbians.

The Archives were founded in 1974 by lesbian members of the Gay Academic Union who had organized a group to discuss sexism within that organization. Co-founders Joan Nestle, Deborah Edel, Sahli Cavallo, Pamela Oline, and Julia Penelope Stanley wanted to ensure that the stories of the lesbian community were protected for future generations. Until the 1990s, the Archives were housed in Nestle's Upper West Side, Manhattan apartment. The collection eventually outgrew the space and was moved to a brownstone that the group had purchased in Brooklyn's Park Slope neighborhood. The Archives hold all manner of historical artifacts relating to lesbians and lesbian organizations and have grown to include some 11,000 books and 1,300 periodical titles, as well as an unknown number of photographs.

Following the Stonewall riots of 1969, many groups devoted to gay liberation were formed. Joan Nestle credits the creation of the Lesbian Herstory Archives to the Stonewall riots "and the courage that found its voice in the streets." The Gay Academic Union (GAU) was founded in 1973 by gay and lesbian academics interested in contributing to the movement. Lesbian members of the union started a consciousness raising group to discuss sexism within the GAU. The women were concerned with how easily lesbian herstory had been lost and did not want their story to be told by patriarchal historians. Joan Nestle later elaborated on the impetus for the Archives, writing "The roots of the Archives lie in the silent voices, the love letters destroyed, the pronouns changed, the diaries carefully edited, the pictures never taken, the euphemized distortions that patriarchy would let pass." The motto of the Lesbian Herstory Archives is "In memory of the voices we have lost." The original statement of purpose for the organization provided that the collection must never be bartered or sold, that it should be housed in a lesbian community space staffed by lesbians, and that all women should have access to it.

The founding members of the Lesbian Herstory Archives had backgrounds in lesbian feminism and political lesbianism and included Joan Nestle, Deborah Edel, Sahli Cavallo, Pamela Oline, and Julia Penelope Stanley. Lesbian activist Mabel Hampton, who had worked as a housecleaner for Nestle's family when Nestle was growing up, was also an early collaborator. The founders started gathering and preserving documents and artifacts related to lesbian history. They were interested in the social history of the community and collected all manner of materials related to lesbian history, regardless of whether the lesbian was famous or part of a marginalized group. Edel later related how they would joke that if an object was touched by a lesbian, they would collect it. The Archives debuted in 1974 and were housed in the pantry of an Upper West Side apartment belonging to Nestle. The location of the original archives was recognized as a Women's Rights Historic Site by the borough of Manhattan in 2008.

LHA began producing a newsletter, the Lesbian Herstory Archives News, in June 1975 and opened their archives to the community in 1976. In 1979 LHA became one of the earliest queer non-profits in New York when they incorporated as the Lesbian Herstory Educational Foundation.

The Archives eventually took over much of Nestle's apartment and it was necessary to find a new home for materials. After years of fundraising that began in 1985, LHA purchased a four-story brownstone at 484 14th Street in Park Slope in 1990. The Archives were relocated to their new home in 1992 and an official opening took place in June 1993. The 16th issue of the Lesbian Herstory Archives Newsletter from December 1996 announced that the mortgage for the building had been paid off. Today its holdings include some 11,000 books and 1,300 periodical titles, as well as an unknown number of photographs. 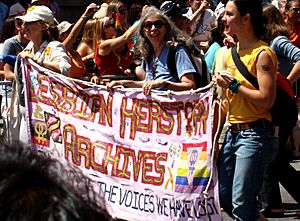 Women marching in the 2007 New York City LGBT Pride March hold a banner for the Lesbian Herstory Archives with the byline "In memory of the voices we have lost".

The Lesbian Herstory Archives are run by a coordinating committee who determine which items are accepted into the archives. The Archives are entirely staffed by volunteers and interns. LHA hosts events in its space, including courses, speakers, marathon poetry readings, and an annual Valentine's Day event. Archivists from LHA regularly march in the New York City Dyke March and until 2014 in the LGBT Pride March.

In the early years of the Lesbian Herstory Archives, samples of materials from the Archives were brought to speaking engagements. In order to preserve them, a traveling slide show was developed. LHA also sponsors traveling exhibits organized around various themes. Its "Keepin' On" exhibit features African American lesbians.

The Lesbian Herstory Archives began with personal materials donated by the founders. It includes everything written by founder Joan Nestle. The founders also put out a call for donations of materials and gradually increased their collection over the years. Today the collection holds all manner of historical artifacts, including papers, diaries, journals, photographs, tapes, posters, buttons, periodicals, zines, T-shirts, and videos. Copies of films are available for viewing at the Archives and originals are stored off-site in a climate-controlled storage facility.

LHA has accepted donations of materials for the Archives throughout its history. Mabel Hampton donated her extensive lesbian pulp fiction collection to the Archives in 1976. Files from both the New York Lesbian and Gay Historical Society and the Lesbian History Project were donated to the Archives upon the dissolution of those organizations. The Archives hosts the Red Dot Collection, which consists of the library of the New York City chapter of the Daughters of Bilitis, the first national lesbian organization in the United States. Writer and activist Audre Lorde donated some of her manuscripts and personal papers to the Archives. The Marge MacDonald Special Collection consists of the books, papers, and journals of Marge MacDonald, who left the materials to LHA in her will over the objection of her family, who wanted to destroy them. The L Word production donated their press materials in 2010.

The LHA website, which debuted in 1997, has evolved to include a digital collection featuring a virtual tour of the Archives. The digital collection is hosted by the Pratt Institute School of Information. LHA is in the process of digitizing its audio and newsprint collections and the video oral histories of the Daughters of Bilitis. LHA maintains over 1500 subject files on various topics that they microfilmed with the help of Primary Source Microfilm into a set of 175 reels.

All content from Kiddle encyclopedia articles (including the article images and facts) can be freely used under Attribution-ShareAlike license, unless stated otherwise. Cite this article:
Lesbian Herstory Archives Facts for Kids. Kiddle Encyclopedia.