The Levern Water, (Scottish Gaelic: Uisge Labharain) is a small river in East Renfrewshire and Glasgow, Scotland. It rises in the Long Loch, and flows generally north and east, past the towns of Neilston and Barrhead, for a total distance of 9 miles (14 km). It empties into the White Cart River.

The Levern Water facilitated the socioeconomic growth of parts from East Renfrewshire by providing water power for cotton mills as well as homes.

The source of Levern Water is Long Loch in East Renfrewshire, from which it emerges at the north-eastern tip, at coordinates 55°44′57″N 4°24′54″W﻿ / ﻿55.7491°N 4.415°W﻿ / 55.7491; -4.415. It flows from there north-west for a short distance, before entering a 41-hectare (100-acre) reservoir formed by the four sections of the Harelaw Dam. The dam was built in 1844 and is used for trout fishing. The river continues west to the smaller Commore Dam reservoir, from which it emerges due north, gradually turning towards the north-east. It flows past Neilston on the west and north of the town, continuing east from there to Barrhead. After leaving Barrhead, the river runs north-east, forming the boundary between East Renfrewshire and the city of Glasgow, and crossing the Glasgow South Western Line at the Levern Water viaduct, before fully entering Glasgow close to Nitshill, where it also crosses the A726 dual-carriageway. It continues past the suburb of Pollok, and joins the White Cart River near to Crookston Castle, which was where Mary, Queen of Scots fled following the Battle of Langside in 1568. 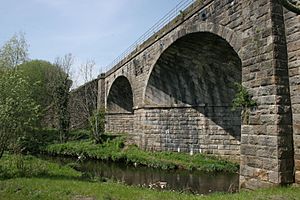 In 1847, the Glasgow, Barrhead and Neilston Direct Railway built a three-arch viaduct across the river, designed by engineer Neil Robson of Glasgow. The viaduct was constructed using rusticated ashlar blocks. The viaduct has been listed as a Category B site since 17 February 1992. The viaduct also passes over the top of the minor Salterland Road, which has its own Category-C–listed bridge over Levern Water featuring two arches, adjacent to the rail viaduct and built in the 18th century.

All content from Kiddle encyclopedia articles (including the article images and facts) can be freely used under Attribution-ShareAlike license, unless stated otherwise. Cite this article:
Levern Water Facts for Kids. Kiddle Encyclopedia.