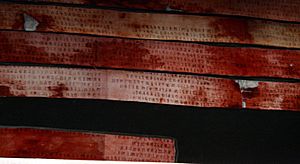 The Liber Linteus Zagrabiensis (or Liber Agramensis) (Latin: Linen Book of Zagreb or Book of Agram) is the longest Etruscan text and the only existing linen book.

Most of the text has not been translated, because the Etruscan language is only known little. According to the few words that can be understood, the text is probably a ritual calendar.

The fabric of the book was preserved when it was used to wrap a mummy from Ptolemaic Egypt. The mummy and the manuscript are now kept in a refrigerated room at the Archaeological Museum in Zagreb, Croatia.

All content from Kiddle encyclopedia articles (including the article images and facts) can be freely used under Attribution-ShareAlike license, unless stated otherwise. Cite this article:
Liber Linteus Facts for Kids. Kiddle Encyclopedia.