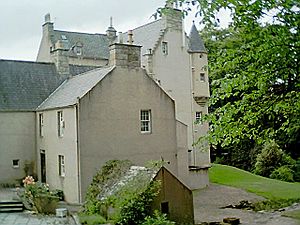 Lickleyhead Castle is a well-restored L-plan castle, dating from around 1600, a little south of Auchleven, by the banks of the Gadie Burn, in Aberdeenshire, Scotland.

The estate originally belonged to Clan Leslie, but William Leith, who had twice been Provost of Aberdeen, acquired it from George Leslie in the 13th century. It remained in that family until, in 1625, Patrick Leith sold it to William Forbes of Leslie, who is thought to have restored the main element of the building, perhaps with the help of John Bell of Aberdeen.

While residing in the house, William Forbes, son of John Forbes, accidentally shot off his hand. This was believed to be judgment on him for the murder of Alexander Irvine, who was thought to be a supporter of the Marquess of Montrose. After the Restoration, he was executed for the crime.

The house was owned by the Hays for a period from the end of the 17th century.

Patrick Duff of Craigston purchased the castle in 1723. He and his son built a new wing to the castle and remodelled its interior. There were further additions during the 1820s by Henry Lumsden, after he acquired the property from the Ogilvy-Maitland family.

The castle was the seat of the lairds of Premney.

Don Guillermo de Landa y Escandon, the Governor of Mexico City, purchased the castle for his daughter Maria Luiz in 1922 when she married a Leslie. Her great-granddaughter Rose Leslie, the actress, lived at Lickleyhead Castle when young. The castle was lost by her father in 2018. The current owners are the Davies family, originally from the Wirral.

The main block of the castle lies east to west, with the wing providing cover over two faces by jutting out southward. In the main block there are corbelled two-storey turrets on the north front, the upper floors having oval windows. A heavily corbelled semi-circular stair turret, corbelled out to square, rises in the west re-entrant; it provides access to a watch-room in the wing. The castle has crow-stepped gables. It is harled, and has a slated roof.

The tower rises to three storeys, with an attic and a garret. While it has no gun-loops it has twelve shot-holes. There are decorated pediments.

There is a vaulted basement, with kitchen and cellar, lit by slit windows; this is accessed by the entrance in the main re-entrant angle to the south. Narrowing turnpike stairs give access to the first floor; ascent afterwards is by the turret stair. There is an excellent hall.

All content from Kiddle encyclopedia articles (including the article images and facts) can be freely used under Attribution-ShareAlike license, unless stated otherwise. Cite this article:
Lickleyhead Castle Facts for Kids. Kiddle Encyclopedia.