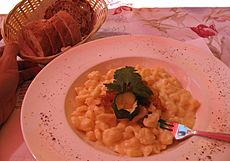 Liechtensteiner cuisine is the cuisine of Liechtenstein. The cuisine is diverse and has been influenced by the cuisine of nearby countries, particularly Switzerland and Austria, and is also influenced by Central European cuisine. Cheeses and soups are integral parts of Liechtensteiner cuisine. Milk products are also commonplace in the country's cuisine, due to an expansive dairy industry. Common vegetables include greens, potatoes and cabbage. Widely consumed meats include beef, chicken and pork. The consumption of three meals a day is commonplace, and meals are often formal. 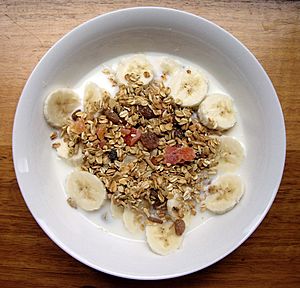 Muesli is a common breakfast dish in Liechtensteiner cuisine

All content from Kiddle encyclopedia articles (including the article images and facts) can be freely used under Attribution-ShareAlike license, unless stated otherwise. Cite this article:
Liechtenstein cuisine Facts for Kids. Kiddle Encyclopedia.