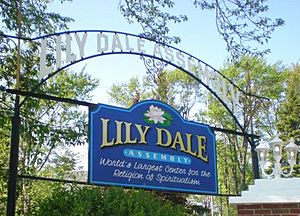 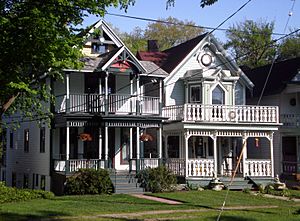 The dominant architectural style in Lily Dale dates from the 1800s 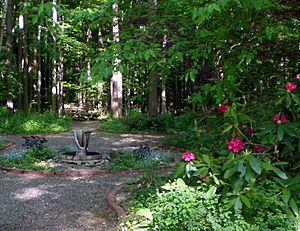 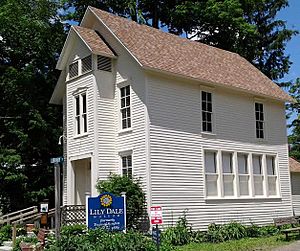 Lily Dale was incorporated in 1879 as Cassadaga Lake Free Association, a camp and meeting place for Spiritualists and Freethinkers. The name was changed to The City of Light in 1903 and finally to Lily Dale Assembly in 1906. The purpose of Lily Dale is to further the science, philosophy, & religion of Spiritualism.

Lily Dale is a hamlet located in the Town of Pomfret on the east side of Cassadaga Lake, next to the Village of Cassadaga. Located in southwestern New York State, it is one hour southwest of Buffalo, halfway to the Pennsylvania border. Lily Dale's year-round population is estimated to be 275. Each year approximately 22,000 visitors come for classes, workshops, public church services and mediumship demonstrations, lectures, and private appointments with mediums. In recent years, guest lecturers have included Lisa Williams, Dee Wallace, members of "Ghost Hunters," Tibetan monks, James Van Praagh, Dr. Wayne Dyer, and Deepak Chopra.

Lily Dale is located on the east side of Upper Cassadaga Lake at an elevation of approximately 1325 ft. Its coordinates are 42°21'06" North, 79°19'27" West (42.351725, -79.324211). Its main route of access is New York State Route 60, which is located about .5 miles east of the hamlet and runs north and south to the cities of Dunkirk and Jamestown. The Cassadaga Job Corps Center can be seen across the lake from Lily Dale. Another very small lake, Mud Lake, is located between Lily Dale and Route 60.

Spiritualism and the Lily Dale Community

Lily Dale became the largest center of the Spiritualist movement as other similar organizations went into decline. Other communities such as Southern Cassadaga Spiritualist Camp (Florida) and Camp Chesterfield (Indiana) were founded on similar principles and are still active organizations. The Fox Cottage of the Fox sisters fame was moved from Hydesville, New York and transported to Lily Dale in 1915 although on September 21, 1955, it was destroyed by fire. Lily Dale is a place of pilgrimage for many Spiritualists and others interested in Spiritualism, the paranormal, and New Age topics. A large population of mediums and Spiritualist healers reside in Lily Dale year round.

The Lily Dale Spiritualist Assembly holds year round meetings and provides seminars on topics such as mediumship, spiritualist studies and topics within the subject of the paranormal. Well-known speakers such as Deepak Chopra, Dr. Wayne Dyer and John Edward have frequently appeared at Lily Dale. This private community is home to The Marion Skidmore Library, Lily Dale Museum, its own Volunteer Fire Department, and also is the location of the headquarters of The National Spiritualist Association of Churches.

Lily Dale contains 160 private residences, 2 hotels, guest houses, Spiritualist and New Age bookstores, 2 eateries, and a café. Free Summer Program booklets announce events such as mediumship demonstrations, religious services, workshops, thought exchange meetings, and healing services. Visitors can also find camp grounds for either a tent or Recreation Vehicles, picnic grounds, and a lake front beach for swimming and sunbathing. A modest admission fee to enter the grounds is charged from the last weekend in June through Labor Day. Admission on Sunday mornings is waived to allow for church attendance.

Lily Dale is the backdrop for a series of young adult paranormal novels by New York Times bestselling author Wendy Corsi Staub, who grew up a few miles from Lily Dale, New York. To-date, the series includes four titles published by Walker Books for Young Readers: Lily Dale: Awakening, Lily Dale: Believing, Lily Dale: Connecting and Lily Dale: Discovering. They have been optioned for television by Freemantle Entertainment. Staub has also written an adult bestselling thriller set in Lily Dale entitled In The Blink Of An Eye, published by Kensington Books in 2002.

A place called "Lily Dale" was the setting for "The Mentalists," a seventh-season episode of the TV series Supernatural, featuring the Fox Sisters as Good and Evil Spirits.

All content from Kiddle encyclopedia articles (including the article images and facts) can be freely used under Attribution-ShareAlike license, unless stated otherwise. Cite this article:
Lily Dale, New York Facts for Kids. Kiddle Encyclopedia.