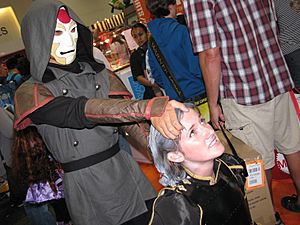 A cosplayer wears a costume of Lin Beifong from The Legend of Korra at San Diego Comic-Con, 2012

Lin Beifong (北方琳, Běifāng Lín) is a major character in Nickelodeon's animated television series The Legend of Korra. The voice was by actress Mindy Sterling. It was aired from 2012 to 2014.

The character and the series, a sequel to Avatar: The Last Airbender, were made by Michael Dante DiMartino and Bryan Konietzko.

She has the same abilities like her mother such as sensing movement based on her feet.

All content from Kiddle encyclopedia articles (including the article images and facts) can be freely used under Attribution-ShareAlike license, unless stated otherwise. Cite this article:
Lin Beifong Facts for Kids. Kiddle Encyclopedia.