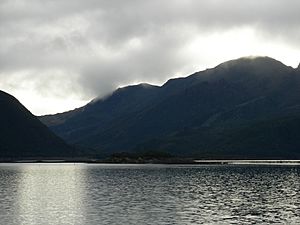 Linda Valley is a valley in the West Coast Range of Tasmania. It was earlier known as the Vale of Chamouni. It is between Mount Owen and Mount Lyell.

Linda Valley is the location of two historical settlements, Linda and Gormanston. These settlements were close to the Mount Lyell mines and workings, at the western edge of Lake Burbury, and east of the old Mount Lyell Mining and Railway Company operations.

The terminus of the North Mount Lyell Railway was at Gormanston for a short time, the main point of operations for the railway was the yard and railway station at Linda, known as the Linda Valley station in early records.

The valley suffered from extensive bushfires in the early twentieth century, and as a consequence the forested valley became denuded. Large numbers of tree stumps line the Mount Lyell slopes in the valley a hundred years after the fires.

The valley is the site of extensive evidence of glaciation in the West Coast Range with a particular stage known as the Linda Glacial stage The valley is also known as part of the landscape affected by the King River Glacier, which also left moraine at Crotty and Henty River

The valley's glacial moraine is the only Late Pliocene site with plant fossil assemblages in Tasmania and one of only a few in Australia.

The valley has been part of recent mineral exploration lease areas - however prospective mineral deposits have not been located to date, possibly due to the glacial moraine.

All content from Kiddle encyclopedia articles (including the article images and facts) can be freely used under Attribution-ShareAlike license, unless stated otherwise. Cite this article:
Linda Valley Facts for Kids. Kiddle Encyclopedia.