Lake Burbury is a man-made water reservoir created by the Crotty Dam inundating the upper King River valley that lies east of the West Coast Range. Discharge from the reservoir feeds the John Butters Hydroelectric Power Station, owned and operated by Hydro Tasmania.

The reservoir was named in honour of Stanley Burbury, a former Governor of Tasmania.

The lake is fed mainly by rivers from the north, including the upper King River, and the Eldon River. Valleys that open to the area include the Linda Valley. It also has a natural lake just north of its northern shore known as Lake Beatrice which is at the eastern end of Mount Sedgwick. It has a surface area of 54 square kilometres (21 sq mi).

It is popular as a fishing lake, but is susceptible to extreme weather. Its feeder rivers are the upper King, Nelson, Princess, and Eldon Rivers. There are design features in the Crotty Dam to lower the surface level rapidly in the event of severe floodwaters.

The lake has the 'Bradshaw' bridge crossing it to connect the Lyell Highway across it, and has two dams - one in the King River Gorge - the Crotty Dam, and the other adjacent to Mount Darwin, the Darwin Dam.

The dam inundated the historical sites of the Darwin and Crotty - as well as the bridge of the North Mount Lyell Railway over the King River which was not salvaged before the flooding.

The Crotty Dam site had been surveyed in the early twentieth century but the proposed dam did not proceed at that time. It was re-visited in the 1980s and involved in the last major dam construction by Hydro Tasmania.

Crotty Dam and Lake Burbury have been identified as Indicative places on the Register of the National Estate. 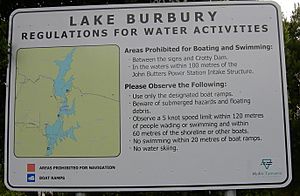 The lake lies to the west of the Franklin-Gordon Wild Rivers National Park and has a series of buffer zone conservation areas; the Princess River Conservation Area and the Crotty Conservation Area on the east shore, and the West Coast Range Regional Reserve on the west. The Hydro Tasmania jurisdiction of the lake is to the 242-metre (794 ft) elevation (the full supply level being 235 metres (771 ft)) round the edge of the lake, as well as the island created by the impoundment.

A webcam is located on the south east shore of the lake which looks across to where the Lyell Highway emerges from the Linda Valley and moves south around the eastern base of Mount Owen.

All content from Kiddle encyclopedia articles (including the article images and facts) can be freely used under Attribution-ShareAlike license, unless stated otherwise. Cite this article:
Lake Burbury Facts for Kids. Kiddle Encyclopedia.