The Crotty Dam, also known earlier as the King River Dam, is a rockfill embankment dam with a controlled and uncontrolled spillway across the King River, between Mount Jukes and Mount Huxley, located in Western Tasmania, Australia.

The dam was constructed in 1991 as part of the King River Power Development Scheme, by the Hydro Electric Corporation (TAS) for the purpose of generating hydro-electric power via the John Butters Power Station located 8 kilometres (5.0 mi) below the dam wall. 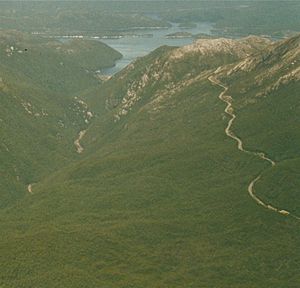 The Crotty Dam, together with the Darwin Dam, are two major dams that form the headwaters for the King River Hydroelectric Power Development. The dam is located in the upper reaches of the King River gorge where the river breaks through the West Coast Range. It captures the high rainfall in the catchment of the King River and allows diversion of water through a tunnel to the John Butters Power Station downstream of the dam.

A unique feature of the dam is its spillway. The spillway is located on the embankment, rather than on one of the rock abutments. This had never been successfully attempted before in the design of dams of any significant height, due to problems in making allowance for embankment settlements. In the case of Crotty Dam, the embankment was partly composed of well graded gravels, and thus a very high modulus of embankment deformation was achieved. The high modulus limits embankment settlements. Additionally, the spillway was designed to articulate in order to accommodate any settlement that did occur.

The spillway is designed to allow sufficient time for a large jet flow valve located in the diversion tunnel to be opened so that larger floods can be safely handled.

The spillway designers, Sergio Giudici, also the chief engineer on the Gordon Dam, Frank Kinstler, Steven Li, Tony Morse and Graeme Maher were acknowledged within the engineering community because the spillway was the first known to provide for articulation of the spillway structure so that movements in its foundations could occur without damage to the overlying structure.

The water from Lake Burbury is conveyed through a 7-kilometre (4.3 mi) long unlined tunnel that runs through Mount Jukes to the John Butters Power Station, which is located on the King River downstream of the dam and King River gorge, near the confluence with the Queen River.

The dam was constructed in the 1980s following the abandonment of the Gordon-below-Franklin power development scheme, part of the Franklin Dam. The Crotty Dam was commissioned in 1991, with the King River Power development being completed by 1992.

The dam is named in honour of James Crotty who founded the North Mount Lyell Copper Mine at the turn of the 20th century. A ghost town site of the same name Crotty was submerged by the waters of Lake Burbury.

In the 1910s the Mount Lyell Mining and Railway Company had investigated and surveyed a site very close to this dam for a proposed hydro electric scheme. Charles Whitham also wrote of the inevitability of the dam in 1927 and even proposed "Lake Dorothy" as a name for the reservoir.

In 2001, Engineers Australia selected Crotty Dam as one of the 25 dams with the greatest Australian heritage value.

All content from Kiddle encyclopedia articles (including the article images and facts) can be freely used under Attribution-ShareAlike license, unless stated otherwise. Cite this article:
Crotty Dam Facts for Kids. Kiddle Encyclopedia.