Crotty is a former gazetted townsite that was located in Western Tasmania, Australia. The township was located on the eastern lower slopes of Mount Jukes, below the West Coast Range, and on the southern bank of the King River.

At the turn of the twentieth century, the township had had a smelter and railway connection with the North Mount Lyell mine.

The North Mount Lyell smelters failed, despite attempts in 1901 and 1902 to correct issues.

The company was absorbed by the Mount Lyell Mining and Railway Company in 1903.

The townsite soon lost population, and the North Mount Lyell Railway which serviced Crotty's connections with Gormanston, Linda and Pillinger (Kelly Basin) remained in service for a couple of decades before closing.

Most historical photos of Crotty show the smelters, the hotels, and the very small houses/huts. The most iconic photograph is that found in Geoffrey Blainey's The Peaks of Lyell, dated 1902, which was taken from the embankment just east of the railway line, looking west, up the main street with the smoke from the smelter in the air, and Mount Jukes in the background. 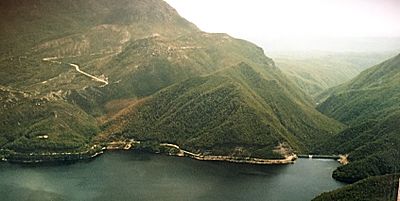 Aerial photograph of Mount Jukes, Lake Burbury and Crotty Dam in early 2000s. The water of the dam in the lower left hand side of photograph is located approximately at the northern most part of Crotty townsite plans

During the late 1970s and at an early stage in the "No Dams" campaign to stop the establishment of a dam on the Franklin River, a small group of musicians in Queenstown formed a group called the 'Crotty Ditty Band'.

During the building of the King power development in the 1980s, the Hydro Crotty Camp was home to several hundred dam construction workers

In the 1990s the townsite was inundated by Lake Burbury which was the result of the completed King River Power development scheme. Despite this, the Tasmanian 1:25000 Owen map still identifies the Proclaimed Town of Crotty.

On the eastern shores of Lake Burbury, the land south of the Lyell Highway, and adjacent to the Franklin-Gordon Wild Rivers National Park, is known as the Crotty Conservation Area. This has an area of 44.2 square kilometres (17.1 sq mi) and was established on 27 December 2000.

All content from Kiddle encyclopedia articles (including the article images and facts) can be freely used under Attribution-ShareAlike license, unless stated otherwise. Cite this article:
Crotty, Tasmania Facts for Kids. Kiddle Encyclopedia.