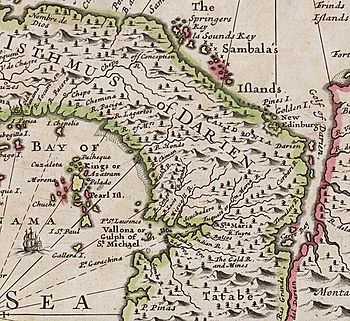 Map of the Darien Scheme, drawn in part with information from Lionel Wafer.

A ship's surgeon, Wafer made several voyages to the South Seas and visited Maritime Southeast Asia in 1676. In 1679 he sailed again as a surgeon, soon after settling in Jamaica to practise his profession.

In 1680, Wafer was recruited by buccaneer Edmund Cooke to join a privateering venture under the leadership of Captain Bartholomew Sharp, where he met William Dampier at Cartagena.

After being injured during an overland journey, Wafer was left behind with four others in the Isthmus of Darien in Panama, where he stayed with the Cuna Indians. He gathered information about their culture, including their shamanism and a short vocabulary of their language. He studied the natural history of the isthmus. The following year, Wafer left the Indians promising to return and marry the chief's sister and bring back dogs from England. He fooled the buccaneers at first as he was dressed as an Indian, wearing body-paint and ornamented with a nose-ring. It took them some time to recognise him.

Wafer reunited with Dampier, and after privateering with him on the Spanish Main until 1688, he settled in Philadelphia.

The Darien Company hired him as an adviser when it was planning its settlement on the isthmus in 1698.

All content from Kiddle encyclopedia articles (including the article images and facts) can be freely used under Attribution-ShareAlike license, unless stated otherwise. Cite this article:
Lionel Wafer Facts for Kids. Kiddle Encyclopedia.