List of circles in Washington, D.C. facts for kids 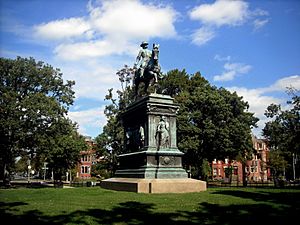 Statue of John A. Logan in the center of Logan Circle

The surface road layout in Washington, D.C., consists primarily of numbered streets along the north–south axis and lettered streets (followed by streets named in alphabetical order) along the east–west axis. Avenues named for each of the 50 U.S. states crisscross this grid diagonally, and where the avenues intersect, traffic circles often occur. Many circles are named for American Civil War generals and admirals, while several neighborhoods take their names from nearby circles.

All content from Kiddle encyclopedia articles (including the article images and facts) can be freely used under Attribution-ShareAlike license, unless stated otherwise. Cite this article:
List of circles in Washington, D.C. Facts for Kids. Kiddle Encyclopedia.