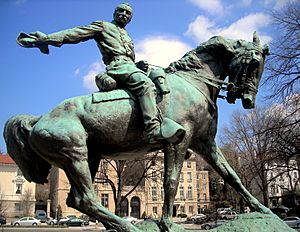 Equestrian statue of Philip Sheridan in the center of Sheridan Circle

Sheridan Circle is a traffic circle in the Washington, D.C. neighborhood of Embassy Row.

A number of embassies ring Sheridan Circle, including the former Turkish chancery, and the Romanian embassy on the southern side, and the Embassy of Pakistan to the northwest.

Dupont Circle is visible down Massachusetts Avenue; in the other direction, the avenue rises toward a bridge over Rock Creek Park.

In 1888, the traffic circle was named for General Philip Sheridan, Union general of the American Civil War and later general of the United States Army.

A statue to honor General Sheridan was originally proposed to stand on the north side of Pennsylvania Avenue NW near 13th Street NW, at what is now Freedom Plaza. Gen. Sheridan's widow advocated to erect the statue at Sheridan Circle instead, with which the statue commission agreed. John Quincy Adams Ward was selected to sculpt the statue. Mrs. Sheridan rejected his original model, saying it was not a good likeness of Gen. Sheridan, and the statue commission rejected Ward's model. The commission and Mrs. Sheridan both approved of a model created by Gutzon Borglum. The statue was dedicated on November 27, 1908. 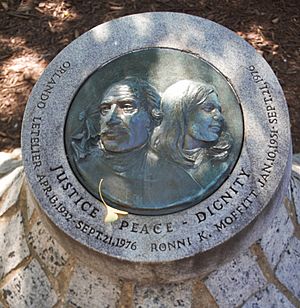 The Letelier Monument, located on Sheridan Circle, is in memory of Orlando Letelier and Ronni Karpen Moffitt

On September 21, 1976, Orlando Letelier and Ronni Karpen Moffitt were killed by a car bomb in the circle. Letelier and Moffitt are commemorated with a small plaque embedded in the grass along the curb where they died, near the Irish and Romanian embassies.

On May 16, 2017, dozens of peaceful protestors were assaulted by Turkish security officials. Turkish President Recep Tayyip Erdoğan, visiting the Ambassador's residence that sits on Sheridan Circle, watched the clashes from a distance.

All content from Kiddle encyclopedia articles (including the article images and facts) can be freely used under Attribution-ShareAlike license, unless stated otherwise. Cite this article:
Sheridan Circle Facts for Kids. Kiddle Encyclopedia.