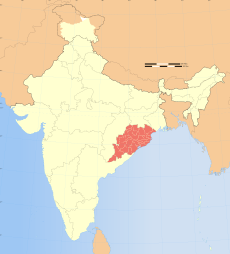 The state of Odisha is in eastern India.

Odisha, a state on the eastern coast of India, is divided into 30 administrative geographical units called districts.

A district of an Indian state is an administrative geographical unit, headed by a District Collector (DC) or Deputy Commissioner in some states (DC). The District Collector is dual-hatted and also holds the title of District Magistrate. As a District Magistrate he or she is responsible for maintaining law and order in that district and as a District Collector responsible for collection the revenue. Generally, an officer belonging to the Indian Administrative Service (IAS) becomes the DC but occasionally officers belonging to the Odisha Civil Service too get appointed. The DC is assisted by a number of district-level officials belonging to different state government department for administering services to the state. A Superintendent of Police, an officer belonging to Indian Police Service is entrusted with the responsibility of maintaining law and order and related issues.

The areas and populations of the 30 districts are given below:

All content from Kiddle encyclopedia articles (including the article images and facts) can be freely used under Attribution-ShareAlike license, unless stated otherwise. Cite this article:
List of districts in Odisha Facts for Kids. Kiddle Encyclopedia.