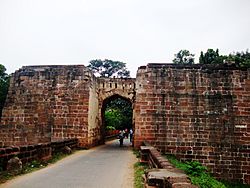 Cuttack is the former capital of the state of Odisha in East India. It is the headquarters of the Cuttack district. Cuttack is nicknamed the "Millenium City" as well as the "Silver City". This is because of its 1000 years history and its famous silver jewelry works. The High Court of Odisha is located in Cuttack. Cuttack is also called as the commercial capital of Odisha. This is due to the large number of trading and business houses in the city.

Cuttack and Bhubaneswar are often called the Twin-Cities of Odisha. The metropolitan area formed by the two cities has a population of 1.68 million in 2014. Cuttack is a Tier-II city as per the ranking system used by Government of India.

All content from Kiddle encyclopedia articles (including the article images and facts) can be freely used under Attribution-ShareAlike license, unless stated otherwise. Cite this article:
Cuttack Facts for Kids. Kiddle Encyclopedia.